Another greenfield bites the dust: with loss of hedgerow containing oak standards, Hook. 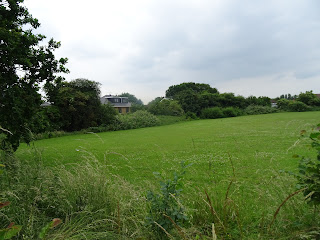 The Hedgerow Regs. are complicated. To qualify a hedge must be >30 years old, be longer than 20m, abutt another hedge and surround open land. The Regs. could  offer greater protection for a habitat and maintain ecological function for a group of veteran oak trees than say, a TPO order. They are in essence, very different: - the latter is an amenity designation; and the other serves to protect a habitat. A dynamic system such as a hedgerow, constantly regenerating itself, can be many hundreds of years old and a good place to start to identify them, is on old maps. 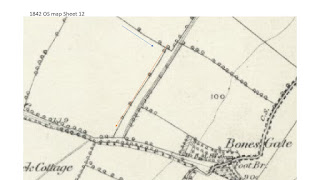 This is a section from an old map of the area from 1842, the red line indicates the same oaks that can be seen in the photo above (taken in 2021). The vegetation was managed grading the habitat from the veteran oak trees down to the scrub layer and was an aesthetically beautiful natural asset in our suburbs.

As far as I am aware, the council began investigating the status of the oaks ~ decade ago when a developer bought up the SLOPE (space left over after planning). The original development concerned was the council's and the SLOPE was a grass verge in front of the line of boundary oaks to the west of the council development.

In fairness, there were many planning appeals before the site was developed. The appeals are the only online record of the management of the hedgerow over time, for example a quantitative commentary on  additional saplings/regeneration. A report produced for the council on the qualifiers for the Hedgerow Regs. appears to be no longer obtainable. Despite multiple failed attempts, permission was eventually granted for housing in 2016 and completed 2018. Now the eastern flank looks like this. 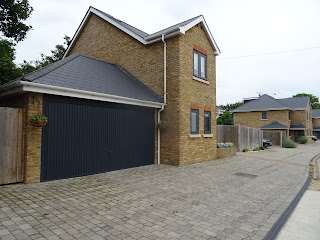 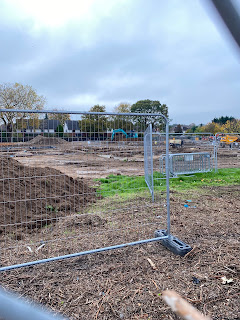 Unfortunately, there are no ecology reports to read on the file as these are stripped out as soon as permission is granted. Although the development on a  greenfield site was given permission, it wasn't to extend to the entire field; 25 perimeter trees (including oaks) as well as the hedgerow vegetation have been cleared, chainsawed and brush cut, (despite nearby records for stag beetles, hedgehogs).  A bat roost was recorded in Ashby Road Chessington in 2020, only 350m away.
Stumps have been ground out or pulled out of the ground (boost the photo to see the oak leaves around the stump). The arisings have been chipped, so much for the eco - standard 'loggeries'. Trees have been cut in half and not in a pollarded way. This means the important eastern hedgerow with the veteran oak standards, no longer abutts a northern treebelt/hedgerow. 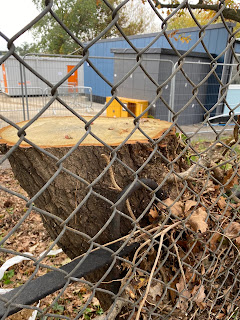 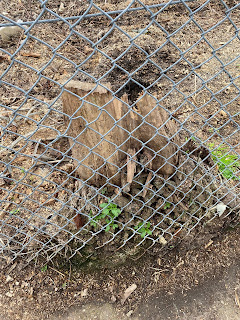 To make things worse for our environment, there followed an application to fell one of the veteran oaks and permission was given for this October 2022 (sorry for poor photo from the planning website but I have to consider GDPR and you can see this for yourself on the TPO applications). Although a recent tree report deeming it healthy, it now has a 'dangerous disease'. 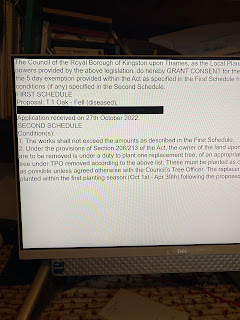 so what will be left?

As a minimum, the ground-works should have followed Good Practice Guidelines and optimized features that would benefit the species recorded locally, rather than retrofit expensive faux features. This would have meant considering  Hedgehog corridors, bat flight-lines, and possibly reptile habitat (records for viviparous lizard along the Bonesgate corridor and slow worm potential due to nearby allotments and gardens). I have recorded all these species when undertaking bat surveys along the nearby Bonesgate stream and have shared this information with the council.
Protecting the scrubby vegetation outside the development area and arisings from tree cutting and other dead wood would have been Good Practice. Yet, only the chipped bark remains from the stump grinder, which is a vandalism of our diminishing natural assets, continuing across the borough with multiple  slow seismic waves of destruction from the centre.
Elder appeared beneath mature trees where birds have been perching and is evidence of natural regeneration. It is an important shrub/tree for nesting birds, deadwood and hollow wood for sheltering invertebrates, as well as hosting fungi.

The fruits of elder are consumed by more bird species than any other British Plant (Snow and Snow 1988). Its fruit can be extremely abundant when located close to a river (Bonesgate) and as it matures early can be important for migratory species before they fuel up for their journeys south.

Bramble/scrub provides an abundance of fruit, rose hips, haws and hazel nuts.  Once enjoyed by many bird and mammal species and offering potential refuges for two species whose numbers have crashed in my lifetime.

Scrub  has the potential to support hedgehog. Hedgehog are a Species of Principal Importance. Hedgehog are also protected against intentional acts of cruelty under the Wild Animals (Protection) Act 1996, making them a material consideration for planning, and as such should be protected as part of the development and habitats enhanced for these species.why was there a need to cut the scrubby vegetation with a brush cutter and why wasn't this staged? How much more will be lost?

The stag beetle is a globally threatened species, protected under the Wildlife and Countryside Act 1981, as amended, and listed as a priority species for the UK and London Biodiversity Action Plans. This is highlighted due to the amount of dead wood on site and the allotments nearby.

Its distribution has contracted in the last 40 years, although it is still locally common in a number of ‘hotspots’ such as the Thames Valley around London. It is believed that the destruction of its key habitat – dead wood – through the ‘tidying-up’ of woodlands and gardens is the prime reason for its decline, although in urban areas the impacts, cats and other predators will also be significant.

The stag beetle requires dead wood to complete its lifecycle. The eggs are laid underground by logs, or stumps of dead trees, and the larva (or grub) will spend up to seven years inside slowly growing in size. Adults emerge from the soil beneath logs or stumps from mid-May until late July. Males emerge earlier and appear to be more active as they search for females to mate, and can often be seen flying on sultry summer evenings an hour or two before dusk. As adults they are short-lived and generally die after mating, although occasionally some may over-winter in places such as compost heaps. But this is less likely now in Hook.
Members of environmental professional bodies are encouraged to go further than this and dead wood fallen, hollow and felled dead wood are considered important habitats to be retained. The loss of corridors and flight-lines in this context is a retrograde step. Fifteen years ago these would have been on everyone's agenda. Now they are cleared away - as if rubbish - and with impunity.
But what of the impact on the wildlife at Moor Lane allotments and the Bonesgate stream SINCs of a loss of an open field of this size. There will be a loss of communication by the smaller species especially birds, bees and butterfly species between sites created by these larger and larger gaps. Many hoverflies were present 2021, including Volucella species and marmalade hoverflies. 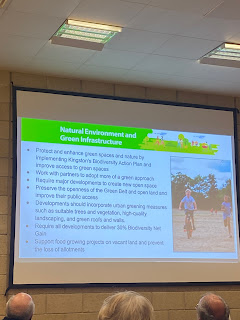 This Wednesday 16.11.22, the Kingston Society hosted a presentation of the emerging Local Plan by three council officers and the only 'green topped'  policy (above) stated it would preserve the openness of green belt and open land. When I made the point that we were already losing both to Chessington World of Adventures, Kingsmeadow and now Moor Lane playing fields, the retort was 'this is allowed for schools'. So shouldn't the policy read that 'we will preserve the openness of open land until someone wants to build on it'.
If you have anything to add on the loss of a valuable natural feature by attrition over the last decade, please do so via the comments. I have relied on memory and welcome polite criticism and additional facts, provided they are not just 'people need homes/schools/etc'.; there are ways of completing developments that are respectful of the environment. I will not publish your comments if you wish to keep them private.
See other lost greenfield sites in Kingston here: - kingsmeadow-slow-worms. development-at-204-210c-cambridge-road. outcomes-for-biodiversity. the well - read item chessington-world-of-adventures-amazon.html
Hook Kingston LOCAL PLAN lost greenfields STAG BEETLE TPO v Hedgerow regs