The last day of May, I went to see if I could find the black redstart that had been widely reported, no luck but it will turn up again on one of the old buildings. The lush vegetation was looking beautiful between the Filter Beds at Seething Wells. I made a note of the breeding birds: goldfinches twinkling away, blue tits gathering food, sand martins flying over the FB's (only two this year unfortunately) moorhens and some scruffy little coot chicks entangled in the algal blooms. 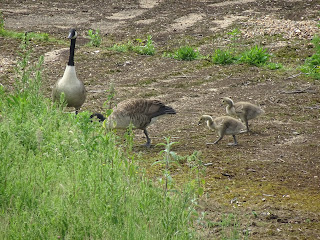 Proud parents were showing off their four Canada chicks; they can cover a lot of ground in a short space of time they were soon feeding on water pepper and bistort gleaned from  the ziggerat-sided basins. A song thrush sang from the wharf alongside greenfinches as well as the seasonal chiff chaff; although this year all numbers are down, reflecting not only the topsy-turvy Spring but also the continued tumble in insect numbers (even seed eating birds are dependent on insects to feed their young). 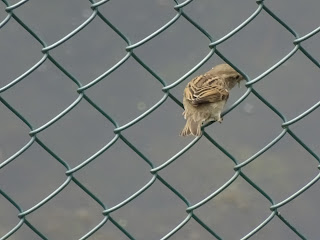 A female house sparrow was foraging in a corner of FB4 with a clutch of small worms in her beak ready to take to an nearby nest. A wren scuttled in the corner of FB7 around the stand of phragmites unperturbed by a cormorant who had been successfully fishing in FB5; now  playing statues.

Grey wagtails had a strong presence on the site and there were probably two territories. Sadly only one little grebe has been able to nest this year- in the greatly reduced water levels- after the January draining (see January post). Nevertheless it was productive and the female was sitting on a nest while the male patrolled up and down FB7; and now... 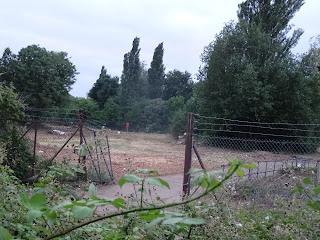 All fucked.  Ground, chipped, slashed and brush cut - vegetation gone in the peak bird breeding season and on a SITE OF IMPORTANCE FOR NATURE CONSERVATION. Even the reed bed has been strimmed. If any birds survived they would have been easy reach for the resident foxes and the mink which are on the increase with daily sightings along the Hogsmill.