Showing posts from June, 2013
Show All

June 21, 2013
Walthamstow Wetlands is another  project to open up the largest purpose-built water body in London to the public. The project has been developed by the Walthamstow Wetlands Partnership, led by the reservoir owners Thames Water and Waltham Forest Council.  The aim is to redefine Walthamstow Reservoirs as a distinctive urban wetland nature reserve in the heart of north-east London and create a special heritage asset which becomes a valued part of the cultural, social, economic and environmental life of our community.  An open day is being held for all on Saturday, 13th July, 2013 11am—3pm The Mill, 7 - 11 Coppermill Lane Walthamstow, London E17 7HA http://www.wildlondon.org.uk/sites/walthamstow-wetlands
Post a Comment
Read more

June 20, 2013
At the last public meeting, slides were shown of wildlife  models of former Thames Water sites, such as Leg O' Mutton reservoir and Woodberry Wetlands in Hackney. A previous post gave details of a meeting convened with the Friends of  the Leg O' Mutton reservoir. There is now an open day at the Hackney site if anyone is interested in attending. The publicity is below. You may be interested to know - particularly if you are a Hackney/Haringey resident - of our new Woodberry Wetlands project. Please find below our invitation to local residents to come to our open days at Stoke Newington East Reservoir. The first is this Saturday between 10am and 4pm (drop-in) and the second is Sunday 7 July also between 10am and 4pm (drop-in). The events will provide residents with a unique opportunity to come and see our truly exciting plans to grant access to the Reservoirs (East and West), improve habitats for wildlife and repurpose a Grade II listed building (the Gas House) into a volunte
Post a Comment
Read more 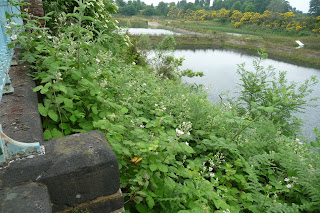 Brambles  The flower walk, which was due to take place at the end of the month around the perimeter fence at the Seething Wells Filter Beds, has been cancelled.  This is due to the fact that the wild flowers, which had formed part of the chalk grassland and are named on the Site of Nature Conservation Interest (SNCI) citation within our Local Development Framework, are now overgrown by brambles, bracken and trees. It has taken the current owners, precisely two years to thoroughly neglect all of the features at the site, but why haven’t the council acted. When Thames Water placed an unauthorised red pipe (see previous posts) across the Chelsea Tunnel by FB 1 several years ago, there was uproar and talk of enforcement action with a posse of the Conservation Team going on a site visit. Twice, I have had the council on my case because my Jerusalem sage grows a flower petal too far over the pavement at this time of year.  Holm oaks and Ash saplings Yet at the recent pu
2 comments
Read more
More posts