Oaks and maples Cambridge Gardens 2019
Street trees can often be the most beautiful objects in our streets. They are important to their communities as well as having environmental benefits. They are a living history in our landscape and can have particular connections. They may be fragments of a previous landscape incorporated into a modern street scene, such as the oaks at Cambridge Gardens once  part of the Duke of Cambridge's estate.  A great read with information on how to research street trees is a  History of Street Trees by Dr. M. Johnston. 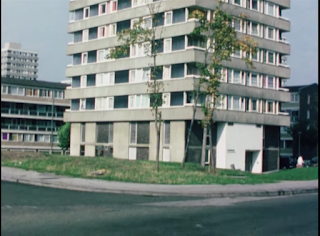 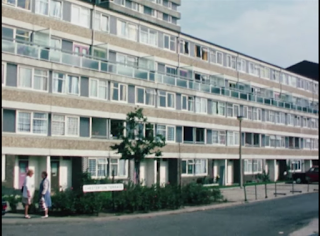 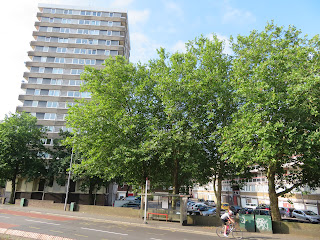 London planes, oaks and limes 2019
The demolished houses  were in Asylum rd (now St. Peter's) Eureka rd, Cambridge Grove rd, Franklin rd, Washington, Burrit and half of Vincent rd. These were fairly treeless excepting those that belonged to a church (now demolished) on the corner of Vincent rd and perhaps the large poplar tree behind Tadlow,  subject of a planning battle some years ago. When the estate was opened in 1972 it was with over 100 trees planted around areas of rolling parkland.

It seems these and many since planted, will be lost in the regeneration, with only ~35* trees retained according to plans recently exhibited (left).  Trees have been given identities to soften  their loss, such as the 'Piper willow'. It is actually its nearby sister, the 'Ely Court willow', which is the handsomer, but ill-fated tree.

Together they  provide a pleasant and healthy environment for all of us - the urban forest of Kingston Town. It is a false premise to think that the loss of  these  currently - 200 trees - will not have an impact on local air quality,  avoided water run-off, attenuation of the London heat island effect, insect productivity, bat activity and movement around the site, nest sites etc.


Government Indices of Deprivation show the areas that are most disadvantaged correspond very well to areas where there are no trees, no tree canopy cover and many vacant tree pits (Study of Waltham Forest, B. Crane http://www.bgcassociates.org.uk/articles). European and Canadian studies show that residents living in housing blocks with trees, spent less time at the doctors than  those living without them. The same discrepancy was demonstrated with expenditure on medicines (countries where drugs are chargeable). Nature . com has additional of scientific papers on this theme Neighbourhood greenspace and health 2015 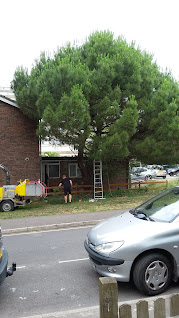 Who owns the trees on the CRE? Do they belong to the community, the council or the developers? Street trees in narrow Victorian and Edwardian streets are often located in front gardens; an area over which the council has little control, unless it is in a conservation area. As controlled parking zones increase, trees are inevitably lost. But CRE is public land and a stand can be made. But tree removal has already begun - with the felling of 6 trees at Hawks Road Clinic and the chipping of this mature stone pine from a front garden   - before the resource can even be accurately defined and  quantified.

The council's current Tree Strategy attests that 100 trees are required to replace one aged 100. The combined age of the 200 trees on CRE will amount to many required replacements. The trees lost at Southwark's Heygate Estate  due to regeneration accrued  £1.3 million under the CAVAT system of valuing trees. The developer  paid this sum over to the council by way of a s106 agreement.

However new trees could not be accommodated in the final scheme due to constraints of the cables and pipe filled trenches within the increased development footprint. Each tree removal will be for its very own different reason, but the result will be the same; if not careful our approach to street trees may become theatre rather than a matter of strategy and policy. Something the council does have control over is its Tree Strategy and negotiating position.
* The number of trees to be retained has since increased but not to British Standard: 5837. A mesh will be employed so the 37 blocks can be  constructed on RPA's