Showing posts from October, 2011
Show All

October 22, 2011
PROTECTION Seething Wells Filter beds, including the land known as the wharf and the river wall are theoretically no longer under threat of housing development. According to the UDP inspector’s report March 2004 they are now protected as Metropolitan Open Land in their entirety. The filter beds are also an SNCI (Site of Nature conservation Importance) a designation conferred on the filter beds in 1992 by the former London Ecology Unit, irrespective of whether the local authority accepted the designation at the time. The river Thames is designated a Site of Metropolitan Importance throughout its metropolitan length. In addition there is a functioning SASC (Strategic Area of Special Character) to protect strategic views. Offsite and onsite land has SNCI (Site of Nature Conservation Importance) and SMI (Site of Metropolitan Importance) designations make the Filter Beds the most designated section of our river (Inspector at the Core Strategy Hearings September, 2011). Taken together
Post a Comment
Read more

October 21, 2011
The Filter Bed site at Seething Wells is facing a monster planning application Hydro Properties Planning Application . This is far more damaging than the Thames Water 2002 application, which sought only to develop the Wharf site, whilst leaving most of the heritage and wildlife areas  intact (and unaffected by water pollution, disturbance, lighting). Our council specnt £20,000 of our money at the Public Inquiry trying to defend its decision to reject the proposals. This is probably the best site in the borough for 'specialized' wildlife communities, because of the lack of disturbance. It is also an important heritage site. The main features include: The Industrial archaeology; Standing Water habitat (a UK, Regional and local Biodiversity Priority Habitat); Roost sites of European Protected Species; Birds on the Red List of Conservation Concern; 5% of Surrey's Little Grebe breeding population; Invertebrates of National, Regional and Local Importance; Chalk grassland
2 comments
Read more 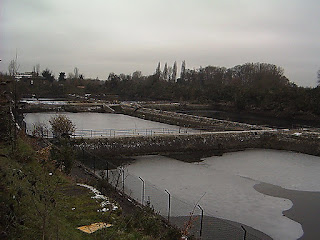 December , 2010 Ecologists undertake what is called an evaluation of the habitats and species within a site. This means that they assess the rarity and fragility of it's ecological communities. This is often undertaken during an Environmental Impact Assessment. An EIA is performed when requested by a planning authority. During the EIA undertaken by Thames Water at Seething Wells, some of the ecological communities were assessed as of HIGH REGIONAL VALUE. This was part due to the invertebrate fauna in the standing water.  Four water beetles were described as Nationally Notable B species, two of which were described as 'rare inland'. The bird community is complex to describe, due to many factors including: the cyclical nature of bird populations. But reed bunting, a rare breeding species once found at Filter Bed 7, is even rarer now (sadly no longer recorded in urban areas, only at the fringes of the borough). The calcareous grassy banks (see post below) once
1 comment
Read more 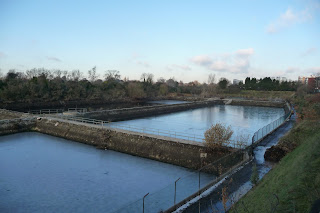 Legislation to Halt Biodiversity Loss This is a bit of a convoluted article but it is important  to demonstrate that our Local Planning Authority has a duty to protect Seething Wells under International Convention, (enshrined in our Planning Law). The first global agreement to protect wildlife was signed by over 150 world leaders in Rio de Janeiro in 1992. It is often called the ‘Rio Convention’ and participating countries are required to draw up plans detailing how they intend to protect their biological diversity. National Biodiversity Action Plans (BAPS) The European Union has now made the further commitment to halt biodiversity loss by 2020 at Nagoya.  All signatories to the UN Convention on Biodiversity, are supposed to draw up national biodiversity plans. Together, their voluntary actions are supposed to halt over-fishing, control invasive species, reduce pollution minimise the pressure on coral reefs from ocean acidification, and halt the loss of genetic diversi
Post a Comment
Read more 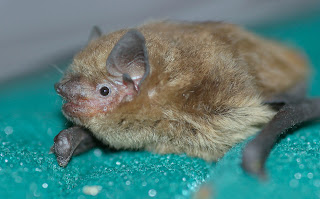 Bats of Seething Wells additional articles regarding the Bats of Seething Wells   Kingston benefits from being encapsulated by RB Richmond and the river Thames. Kingston is 12% open space, whilst Richmond is 55% open space. The nature reserves in Kingston tend to be small linear parks along the rivers Hogsmill, Bonesgate and Tolworth brook. Woodland canopy cover is rare habitat in Kingston and tends to be restricted to Chessington and Kingston Vale. It is woodland that forms the primary habitat for many bat species all of which will usually spend some of their nights foraging near water. Bats require large areas of quality habitat, with strong linear features used for navigation and that are unaffected by light pollution. There are 17 bat species in the UK. Of these 10 are regularly recorded in the London Region, all of which are recorded in Richmond Borough (although two of these are only rarely found). Of the eight species recorded in Kingston: four are recorded regularly (em
Post a Comment
Read more 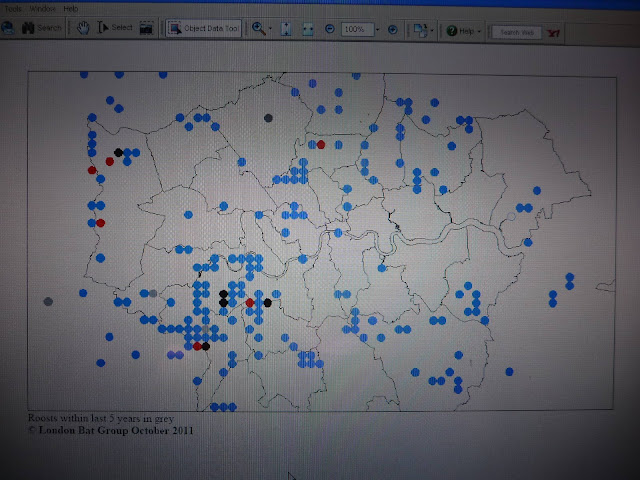 Daubenton's roost distribution London Bat Group 2011. Knowledge of a roost location is usually kept ‘secret’. However, the Daubenton's maternity colony at Seething Wells has become widely known and why not, it is something we should celebrate. What hasn't been publicised is the rarity of Daubenton's colonies in London. The distribution map indicates known Daubenton's roosts within the London Region, recorded within the last 5 years. These are marked by the grey dots of which there are only 4.The black dots are the numbers of Daubenton's roosts known in the last ten years swelling the total to nine. The red dots indicate all the roosts we have ever known since we began recording. The blue dots equate to all flying records and the open water habitats where this bat is found. Daubenton's bats require very specific habitat requirements. Daubenton's bat Daubenton’s bats are closely associated with water and this species is known for its habit of
Post a Comment
Read more 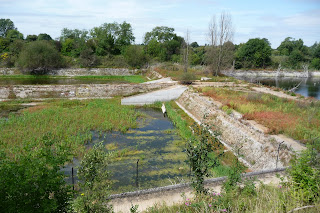 During 2011, the Filter Beds were drained for the purpose of 'inspecting the structure of the basins'. Whilst destroying  the breeding  habitat of 5% of the County little grebe population as well as Nationally Rare and County Notable invertebrates, it  allowed an interesting mosaic of habitats to be created. These included wet grassland, wet mud and reedbed. Reedbed is a national priority habitat.It is important for a host of rare species and it is very scarce in our borough. The reeds were a mixture of phragmites and lesser typha Typha angustifolia, the latter being less well known in the London Region. For example, we have reedbed in Chessington, which was found to be a roost site of c50 reed buntings.....at the time the largest known County roost site. At the time of writing the reedbed has been destroyed, cut reeds have been piled up in the platforms between the beds and dead reeds are floating in the water. Of the  mosaic of habitats apparent during August wet grasslan
2 comments
Read more 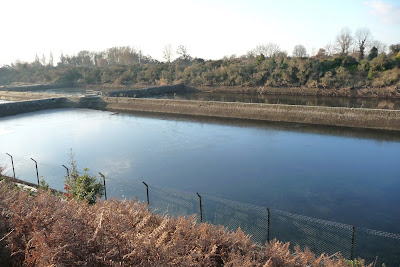 Filter beds showing Spanish Broom along the riverside wall    Spanish Broom Any discussion about the vegetation on the Filter Beds must start with the Spanish Broom, which when in full yellow glory, forms a landmark in the area. For us it is characteristic of and special to Surbiton, something local residents can feel pride, when a visitor remarks on their surprise  glimpse of gold, whilst visiting the district.  For small songbirds it provides the main structure for nesting, a refuge from predators; as well as loafing and foraging habitat . What does it matter that it is non-native, when providing such  useful functions and giving pleasure to those who view it? Generally there is no problem with most non-native species in urban areas providing they are not invasive.   Our Local Nature Reserves are full of non-native species from sycamore and chestnut trees to the usual garden escapes such as asters, golden rod and Himalayan Balsam. They are favoured by pollen and nectaring insect
Post a Comment
Read more 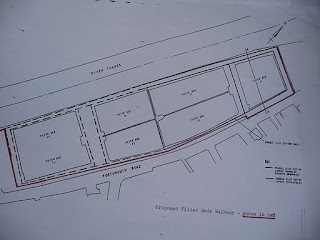 Residents Planning Alliance Submission 2003 A riverside walk would be destructive and disruptive of wildlife features for very little gain. The top level of the wall is quite narrow. When measured in 1996 it was a little over 2.1m (7 feet). It is insufficient for a footway including access for the disabled. Sandwiched between the river and the Filter beds 4m (13 feet) above the Thames, the walk would require guard rails on both sides. The top of the 150 year old wall would have to be cleared of over 50 years growth of broom (see article on Spanish Broom) and trees, which form the main bird breeding habitat on the site. Engineering problems associated with constructing a path would be considerable and for what? There is no linking paths at either end of the Filter Beds.There is no reason why a walk cannot go around the site as proposed by the Residents Planning Alliance (Refer to plan, 2003).Their suggested route around the filter beds is marked in red and retains the tranquil
Post a Comment
Read more

October 13, 2011
Barge Tunnel The barge tunnel has almost no protection as it is not attached to a listed building and was not considered worthy of spot listing during the English Heritage Inspection (although it was never visited due to lack of access).  The barge tunnel can only be entered cautiously by boat as there are a number of submerged hazards of the puncturing kind. At one time it was possible to alight the several steps from a boat and enter the site. A crane hoist still exists with the tunnel recesses and evidence of the iron plates which formed the crane base see Fig 5. For a detailed discussion on the transferring of materials from the Barge Tunnel to the Coal Stores refer to the work of Ron Howes (possibly Hampton Waterworks and its Railway System , by Ron Howes and Ann Grant (from Kew Bridge Steam Museum).
Post a Comment
Read more 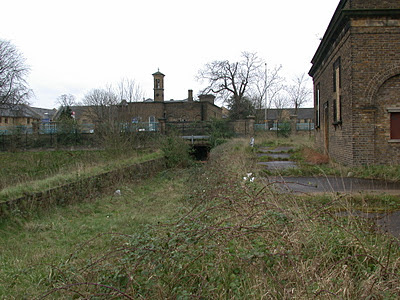 The Chelsea Tunnel was listed before the portal could be destroyed. Although now covered by thick vegetation it is possible to see through these pictures how the site would have looked (2002). Coal, sand, grit, shell would be loaded into hoppers on rails, to be man-propelled down the rake into the tunnels and under the road to the coalstores. Fig. 1 clearly shows the rake down to the Chelsea tunnel. There was consternation when the red pipe (Fig.2) was fitted without the appropriate permissions, across the listed tunnel although it is not known whether the Conservation Team ever carried out enforcement action. Although one brick has always been loosened to allow bat access Fig.3 , it is thought that the brick has been entirely removed in recent years, although the dense vegetation across the portal now creates a barrier into the tunnel. Fig.4. This is perceived as an unfortunate limitation on the accuracy of the eagerly awaited Archaeological Assessment, 2011, which will accompany th
Post a Comment
Read more 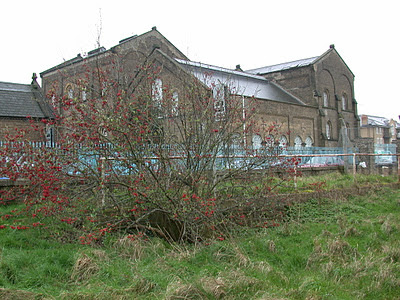 Identification of subterranean features: featuring the Lambeth Tunnel Listed buildings, structures and tunnels. All the significant buildings at Seething Wells are ‘listed’: the Nuffield Pumping Station; and Chelsea and Lambeth coal stores;  the attached tunnels and conduits; and perhaps even the suction wells are listed by default, no matter what their architectural merit. Steps were taken to remediate ‘listing oversights’ and applications were made to English Heritage (March, 2002). This included the Lambeth uncovered coalstore, associated tunnel beneath the Portsmouth Road and its demolished portal. This was granted August, 2002. Once the ‘water was tested’, applications were made (Jan, 2003) for inclusion in the statutory list apropos : Lambeth District offices and stores building (which sits atop the Lambeth Tunnel); the Lambeth Muniments Building and the small pumping station on the wharf.   G rade 11 listing was granted in October 2003 having been judged to be buildings
Post a Comment
Read more 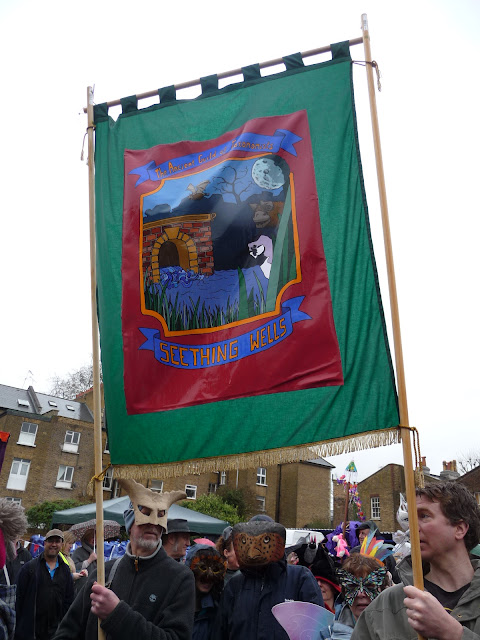