Showing posts from September, 2012
Show All 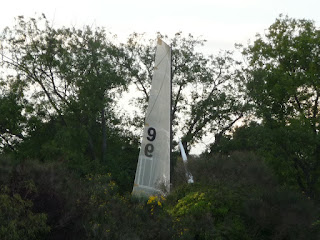 what are you going to say about that then? If you walk past Seething Wells on a Tuesday evening, you might be surprised to see  tall masts appearing over the broom. These boats are from the Thames Sailing Club famous for two reasons: its the oldest river sailing club in Britain, having been formed in 1870; and also as the home of the amazing Thames A-Raters which date from the 19th century. As the clubs main fleet, the veteran Thames A-Raters are a remarkable sailing boat developed early last century specifically for river racing. Some are nearly a hundred years old, but the 27 ft long Raters, with their 45 ft masts and large sail areas are still the fastest boats on the river.
Post a Comment
Read more

September 01, 2012
I hope you won’t mind my replying to your letter of today regarding the Seething Wells Filter Beds via my blog. It gives the advantage that you can respond via the comments box should you wish. Having read with interest your recent correspondence to the press, including todays more measured letter, I would like to respond as one of those accused of ‘hysterical tirade’ and as a fellow member of the Kingston Society. I was also one of those that spent a few of the many volunteer hours working at the London Wetland Centre when the original planting failed and the British Trust for Conservation Volunteers (BTCV) had to put right. I know that we have corresponded previously about the ecology of the Filter Beds site, which is why I was disappointed that your letter did not give weight to any of this information. All of our local and regional organisations with an ecological remit, oppose the Hydro scheme on the grounds that it will damage its inherent features and contribute towards th
5 comments
Read more
More posts