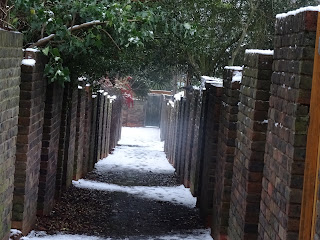 There are 2 km of Public Rights of Way (PROW's) on the Cambridge road estate. These were entered on the Definitive Map last year, after correspondence between myself, the borough Highways department and the Secretary of State. My application to have them recognised - with help from  Sunflower Streets residents assoc. -  was perhaps a pyrrhic victory, as the planning application to  approve the regeneration of the estate will remove them through STOP orders. But they won't be forgotten and those wishing for further discussion including information on  Radburn Lines , can obtain 'A Little Book About Paths', available for purchase on Ebay.   One positive outcome has been the post of a Rights of Way Officer for Kingston and Sutton with the two boroughs contributing £25,000 each.  This means the 'Rights of Way Improvement Plan,' 2009 might at last recieve attention. This is timely as there are many examples of PROW's no longer usable such as the dog -leg betw
Post a Comment
Read more 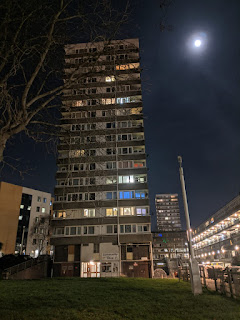 CRE by solstice moonlight S. Seyghal   The planning application  was passed last Tuesday night at the Guildhall, 8 for, 1 against. The proposal is for 2,170 units with 6,477 habitable rooms (average 3 rooms per unit). Kingston Council's CEO took to Twitter and claimed there were only 6 resident objectors to the scheme, until he was spotted and challenged by a vigilant resident. His response to the this challenge was  ' it is very important that the council and it's development department address the concerns sympathetically of the 27% of residents who voted no to the scheme' . (A total of 22 if you follow the CEO's illogic). At the planning meeting held only four days before Christmas, stringent Covid restrictions were implemented and we sat isolated by open windows with ticket holders only in the public gallery. There were 4 speakers from the community and the developers spoke for the prop
Post a Comment
Read more

The Christmas tale: a day of listening 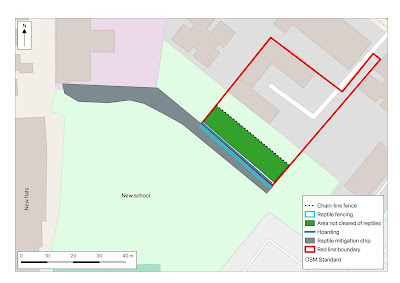 This is a Christmas tale of voices heard at last, more specifically a tale of: - an arthritic woman in a meadow; an emerald green - belt of slow worms trapped in front of a reptile fence; an entourage of politicians.  Stage right Scene Kings meadow. Despite neighbourhood zoom meetings (at a cost of £2,500 for guest appearances) elucidating tomes of written disapproval on methodology and mitigation, noone actually listened to residents living in the ward on the dysfunctional deed that has now been done. Consultants counter -  commentaries were paid for and published (although the invoices for these have disappeared). But none can ignore the-: small size of the site; the narrow strip (marked grey in the plan) that confines the animals; the membrane that covers the former car park that will entrap them; and the three developments of 7, 5 and 5 storeys that will surround them, blocking out the sun (a pre-requisite for a basking creature). The membrane or liner is evident whereve
Post a Comment
Read more
More posts