Showing posts from 2018
Show All

December 24, 2018
Dear Councillors This is a friendly reminder that legally public bodies have a duty under the Natural Environment and Rural Communities Act 2006 to consider biodiversity in all of their functions. I attach the London Guidance from Natural England and some footnotes as to how this is legally applied. I also attach the Kingston Good Practice Guide, which I imagine most councillors and officers have never seen. I know some of you are concerned about this, as I have met with you; some of you think that there are officers taking account of these statutory obligations (well they are not) and there are others that think that housing targets are more important than biodiversity- but then you have decided what the law is, and that children don’t need access to nature and clean air for good physical and mental health. If areas are unfit for hedgehogs, are they really fit for us; and didn’t we sign up to the London National Park City? Remember that the council -as a public body- also
Post a Comment
Read more 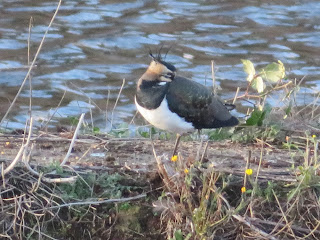 Today's radio had details of an unfortunate court case, which included the headline - grabbing news of the naming of a child 'Adolf'. Names carry powerful connotations and can be imbued with deep significance; the couple who named their son after Hitler were convicted for being members of a banned group known as 'National Action' and were sentenced  to prison for between 5 - 6 years. I began thinking of the power of bird names, either because they are inherently beautiful, have evocative songs such as the skylark, or because of their rarity. Lapwing Seething Wells   When we hear 'Peewit' we mean the Lapwing  or the  bird in the photograph - currently one of only six - but from an original flock of 200 regulars only ten years ago, at the Seething Wells filter beds, and now amongst the rarest bird in the borough. Richard Jefferies writing on "Nature Near London," (1888) noted that 2,000 lapwing overwintered on Tolworth Court Farm. I wonder if th
Post a Comment
Read more 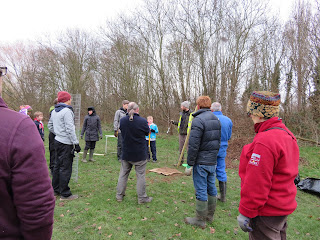 Months of preparation for a new community orchard culminated yesterday with  participants - expertly schooled by the Orchard Project - planting trees and fruit bushes. After digging suitable holes, tree roots were dipped into  a mycorrhizal application of beneficial fungi designed to colonise the  roots and create an early mycelial network within the soil,  increasing nutrient and water uptake. The trees were surrounded in protective cages and three fruit bushes - a gooseberry, red currant, white currant or a black currant - were planted around the base. Photo A. Irving Amongst the trees planted were: a cider apple Tremlex bitter - and apples Newton Wonder , Cor Blimey, cherry Merton Glory and Lapins , a  fig, and a medlar var: Nottingham; a self fertile tree, the fruit of which, should be harvested during October. Pomegranate is becoming more popular in our changing climate and ours was covered with a sheet to protect from the frost during the next few months. It isn'
Post a Comment
Read more 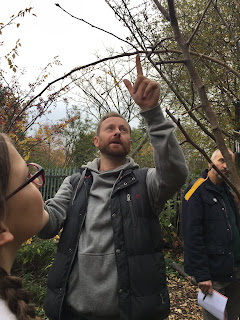 We intend to plant an orchard in Berrylands, where remnants of orchards can be seen in some of the large gardens that back onto Elmbridge Meadows (near Rose Walk). In former days this was  a stronghold for bullfinches, although sadly this beautiful bird is no longer present at many locations in the borough.   Link to the story so far Along with several community groups including schools; members of the newly formed Green Lane Community Orchard, attended the Orchard Project's 'Orchard Leaders' course earlier this  month at Finsbury Park. We visited an edible food forest in the south-east quadrant of the park where Lewis demonstrated annual growth, leaf and fruit buds as well as unusual trees such as medlar. Medlar   We tasted the leaves of salt bush and a Nepalese pepper as well as watching  many birds eating the seasonal berries including the yew arils;  Orchards are hot spots for biodiversity and have been shown to provide a refuge for over 1800 species. Particular
Post a Comment
Read more 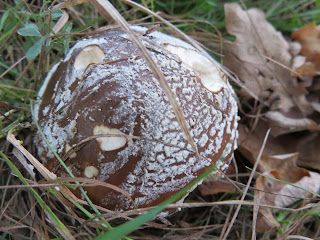 Panther Cap (Amanita Pantherina) - good find for Kingston cemetery - as it is uncommon in Greater London. All species of Amanita are initially covered in what is known as a universal veil, this is tissue that covers the whole of the young fruitbody. As it emerges from the ground the mushroom breaks out leaving the veil at the base of the stem and as patches on the cap surface.I wonder who has been chomping on the cap as this is deadly poisonous!
Post a Comment
Read more

The natural environment of the Cambridge Road Estate 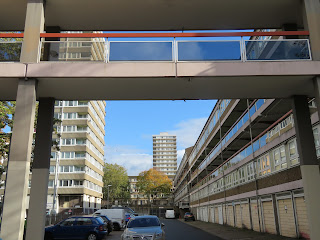 New developments around the Cambridge Road Estate have not only erased any pre-existing 'nature' but made it virtually impossible for any new colonisation, except perhaps by pigeons. There are borough policies to prevent this happening, but no one seems to know where to find them, yet alone understand them;  our officers seem too embarrassed to implement a 'no net loss of biodiversity' policy, let alone achieve the borough's aspiration of 'Net Gain'. When Natural England attempted to give our planning officers a lunchtime training session - which would have counted towards their continuing professional development (CPD) - no one actually turned up. Key: Ppip common pipistrelle Ppyg soprano pip.   This does not bode well for the redevelopment of the Cambridge Road Estate (CRE). The site is full of wildlife, demonstrated by the bird song in the early Spring mornings. Listen to these recordings on Soundcloud here: Sparrows of Willingham Way . Keep l
2 comments
Read more
More posts