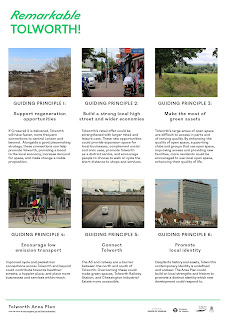 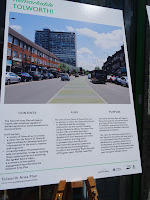 I was disappointed in a number of small inaccuracies in the Tolworth Area Plan consultation, as seen at Tolworth Community Library (13.6.17).  After showing these flaws to the consultants at the time, I expected to see them corrected in the on-line version. A large area of the 'green' shown within the boundary already has development  planned and by not including this as brown land, makes it  appear as if Tolworth could 'afford' to lose some of its open space to yet more development, such as Crossrail; as the first item in the Guiding Principles (see left) it rather biases the consultation.


Another unfortunate omission is the Tolworth Apple Store at Riverhill - a publicly owned 19th  century building- that could provide the focal point for a rich narrative about the orchard heritage that exists in the area; linking current small-holdings, farms and former large estates such as Gosbury Hill to Chessington Hall, with its former fruit growing use.


Orchards are a way of pushing back the urban gradient; by managing for biodiversity- pruning trees in a way that retains the dead wood - orchards resemble wood pasture in miniature in their flora and fauna. The long grass is used by slow worms and hedgehogs and fungi cycle nutrients. The bullfinch once common in the area, is a bird now only regularly recorded at Tolworth and Berrylands (including Field 5847 as well as gardens along Old Kingston Road) and would be more than welcomed in an orchard managed for biodiversity.