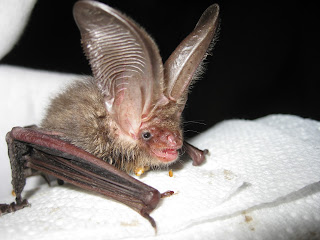 This brown long-eared bat (Plecotus auritus) is one of the bats brought into care last year as it weighed only 4g - half optimum. We still have a small population of this species along the Thames, due to the effect of the habitat provided at Home and Bushy Park Site of Scientific Interest.

Plecotus bats are light - shy,  along with the genus Myotis (Daubenton's bats)  and are at a competative disadvantage with those bat species, which fly and foragage over more open habitats. This means that they are just hanging- on in London.

Recently, Richmond Council placed 20 cowls onto the the luminiares overlooking the Wick Pond to reduce the light spillage onto the water. We are not so lucky in Kingston, where development along the river has led to light pollution noticeably reducing the number of bat (and other nocturnal) species -and their abundance- routinely recorded along the Thames at Canbury Gardens and Queens Promenade, where much of the light - shielding vegetation has been removed.

Warmer colours on the lighting spectrum -rather than bright white lighting- can assist the light-shy bats. There are several papers on this subject and one of the most recent and accessible is this one from the Netherlands.

Response of bats to light with different spectra: light-shy and agile bat presence is affected by white and green but not red light by Kamiel Spoelstra et al

Artificial light at night has shown a remarkable increase over the past decades. Effects are reported for many species groups, and include changes in presence, behaviour, physiology and life-history traits. Among these, bats are strongly affected, and how bat species react to light is likely to vary with light colour. Different spectra may therefore be applied to reduce negative impacts.

The results reveal a strong and spectrum-dependent response for the slow-flying Myotis and Plecotus and more agile Pipistrellus species, but not for Nyctalus and Eptesicus species. Plecotus and Myotis species avoided white and green light, but were equally abundant in red light and darkness.

Opportunistically feeding Pipistrellus species were significantly more abundant around white and green light, most likely because of accumulation of insects, but equally abundant in red illuminated transects compared to dark control.

Forest-dwelling Myotis and Plecotus species and more synan-thropic Pipistrellus species are thus least disturbed by red light. Hence, in order to limit the negative impact of light at night on bats, white and green light should be avoided in or close to natural habitat, but red lights may be used if illumination is needed.
Bats and lighting; red light brown long-eared bat Bushy and Home Park lighting cowls Myotis bats