April 10, 2020
Do you ever wonder what happens to all those blogposts you created online over the years or the photos you post on social media? Several  blogposts and photographs belonging to myself and others have ironically been used to support a regularisation application by an agent for an offshore company.

The application 20/00627/CEU is a retrospective process to show that the Filter Beds are a reservoir. They are no longer, it is claimed,  'filtration beds' as the substrates used in this process were removed by Thames Water before 2010. Further, it is claimed. as the Filter beds have not been drained since 2010 - they are only a reservoir - and this has  been the case without interruption for 10 years.

'The Application seeks a ‘Certificate of lawfulness of existing use’ under Part 191 of the Town and Country Planning Act (1990). Class B8 – Storage or Distribution.To satisfy the requirements of Part 191(2), this Application will demonstrate that the existing use is lawful because the time for enforcement action has expired. No enforcement action may be taken after the end of the period of ten years beginning with the date of the breach.This application must therefore demonstrate that a B8 use has been ongoing since at least March 2010',

The filter beds, they claim, have been used continuously for water storage for the last ten years. So lets look at some of the times the Filter Beds were not being used continously as a reservoir.

The last time the beds were were not being used as a reservoir (lets call it draining) was 2017-2018 and there are many YouTube videos of the aftermath. Lets not be shy in calling out that this was to facilitate the entire nature reserve being stored in the filter beds: chalk grassland, soil, and even small trees. All were submerged into the basins -where much of it can be seen today - in a shallow covering of water. The result was a lot of dead fish as the water warmed up in FB7, which is not actually a Filter Bed, but a settling area. Hardly a reservoir when the beds are full of soil. 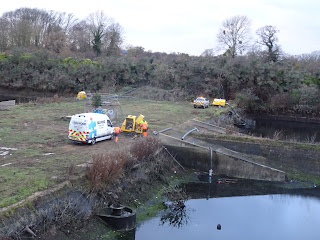 The developers also claim that the substrates that were employed to operate the filtration process have all been removed by Thames Water when they owned the site.

'Thames Water disconnected the site from their wider water treatment operation in 1992. As part of this disconnection, Thames Water produced a number of drawings showing the decommissioning of the water filtration activity. The key drawing is ‘S/DC 11’ dated July 1992 (appended to this application). This drawing clearly shows that remaining aggregates were removed from the beds as part of the decommissioning.'


But former employees attest to the substrate remaining:

'I do recall a TW meeting when we discussed what was should be done with the media after the works was shutdown and some top sand was removed from one bed and taken to Hampton for washing with the intention of mixing the sand in with the existing inventory. I also recall we did some sand profile analysis which was out of current spec. and so further removal of sand was halted. Transport costs to and fro also came into the debate'.

'So effectively those original James Simpson beds are still there there though now massively disrupted by that huge machine that they used to scrape the walls and fill up the beds with dirt and vegetation and all the charging up and down in them'.

and this blog post clearly shows that the sand, gravel and Harwich shells were all present when the structures were drained and inspected in the 2011-12 round of works; this might remind you of our walks and the community project Seething Wells Water  seething-wells-walks- The substrates might be a little mixed up because after the draining, this happened.... 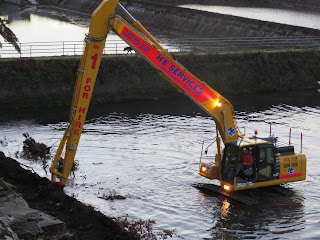 The agent claims that,


'Our role is simply to present the planning case in line with policy and legislation. The current application relates specifically to an existing use; we are not seeking any level of additional development, nor are we seeking to remove or amend any designation applicable to the site.

The application process for a certificate of lawfulness is evidence driven; in identifying and gathering evidence to accompany the application, we commonly review all evidence that is available in the public domain.',

This could be  a  fair point on the face of it, but when you look  at the evidence as demonstrated by the digger above, the constant automated weed-spraying at the site, the destruction of the natural features, a failure to maintain the Building of Townscape Merit as well as the listed railings then the 'evidence' suggests we should act now to prevent the council agreeing to something that might lead to the site being kept in permanent dereliction.


So please respond to this  retrospective application. Put  your photos on line and draw attention to your ward councillors and  MP.


It is difficult to know exactly what the implications of this application are except that it is to prevent prosecution for the misdeeds carried out within the conservation area such as the felling of 24 trees.

If it is accepted that the site is 'only a reservoir' it may mean that the heritage infrastructure associated with the sand filtration process -subterranean pipework- can be removed facilitating an application for a Marina in the future?


As there are photos of the Harwich shells and other substrates (sand and gravel) which formed the basis of the filtration system (before the sites owners mixed it all up with soil)- that form part of the heritage assets- it is not  the case that the they have been removed by Thames Water as the previous site owners.