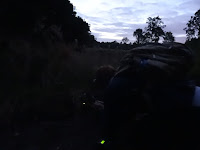 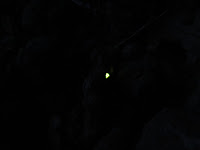 Glow worms can be found at least two locations in north Surrey including Epsom Common and Princes Coverts. We found GW's at the Covers (as Richard Jefferies referred to the site in Nature Near London) several years ago when listening for night jars after the great western hemlock compartments were clear felled to be replanted with wildlife-friendlier broad leaved woodland trees.
Our understanding of the best way to manage a GW site is surprisingly poor. Just as we think we
know what they like, they turn up in some seemingly quite unsuitable location, shunning what we would think is a much better habitat. In general, however, we aim for a mosaic of weedy areas where the larvae can find snails, and open areas where they can display as adults and the males can fly to find them. They may also like a fairly loose soil, or at least places where they can get down into the undergrowth during the day and find a cool, moist spot to lay their eggs. Sometimes they may even turn up on driveways or patios where there are deep cracks, for example, and railway line ballast is also a favourite.


Absence of light is good, though sites are known where they persist despite distant amounts of  road lighting etc. Nevertheless the application for an installation for storing electricity on a green field site  by Saxon Energy along Fairoak Lane is worrying, as it will be lit throughout the night next to our only known local GW site. Renewable Energy Systems Limited (RES)  has prepared a Statement  in support of their planning application for an energy storage facility submitted last October to Kingston Council.
Here is a video of mating glow worms taken at Princes Coverts 23.6.18 on my You Tube channel lets hope the developers ecologists spend some time watching it.
https://www.youtube.com
Glow worms north Surrey border Princes Coverts Richard Jefferies Saxon energy