Tolworth Brook rises at the Grapsome, (TQ170636). It is approximately 5 km in length. It spends much of its time underground or culverted, as it travels through Chessington and Surbiton before appearing through an open box culvert at Raeburn Open Space, Meldone Close. The site is relict agricultural land as can be seen on the Tithe maps 1839. The hedgerows of the former field boundaries have overgrown and seeded to produce the pattern seen today. Old hedge boundaries can have archaeological significance and should be protected. 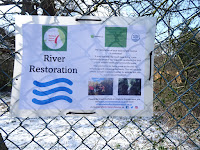 The site has been assessed as important: providing a continuation of the habitats in the Hogsmill River Valley; as well as providing woodland grassland and running water within a fairly confined area. For the last three years restoration plans have been carefully designed to naturalise the stream as it passes through its final stages to the Hogsmill confluence at Raeburn Open Space.


Surveys were undertaken during 2016-17 to inform the works.
Evidence of mammal species included domestic rabbit, hedgehogs, foxes, rodents, and bats.Twenty - seven bird species were recorded along the channel with twenty - four recorded breeding.This was a good number and thought to be due to the amount of restricted access.

Birds recorded were representative of the woodland community including: two great spotted woodpecker territories as well as stock doves, indicative of old woodland trees. The latter is the only hole nesting pigeon in the UK. Kingfishers and little egrets were also recorded. 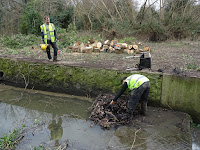 Work began during the new year with volunteers removing bramble and scrub. The professionals began on 28.2.18 with minor tree felling in order to open the river corridor to make space for the vehicles required to break up the weirs and concrete revetments. The egret watched with interest.


Its a big job, which will take a further 40 days, in all weathers including snow. The concrete removal is a difficult operation using the bucket of a digger to manoeuvre the spoil into piles ready for collection. It amounts to tonnes of material.


During April 2015 we visited the source of the Tolworth Brook at the westermost boundary of the borough under the Esher By-pass, where there have been several buzzard sightings this year. The springs rise where London clay meets Claygate gravels at ancient woodland known as the Grapsome. The western side of the path is characterised as hazel coppice with ancient woodland indicator species such as wood anemone, greater stitchwort, native bluebells, primroses, tutsan and wood spurge.

The eastern side is very different with spindly trees including ivy covered sycamores and stands of ruderal vegetation (left) indicating a very different land use-including rubbish dumping. Perhaps this side was the site of the medieval manor dating before the Norman conquest. Much of the archaeological remains were destroyed during the creation of the by-pass.

On our return journey we watched a pipistrelle bat flying through the underpass at five minutes before sunset, indicating that it had not travelled far from its roost.

The return led us along the footpath towards Mansfield Road. This is probably the only two-level path in the borough indicating the use as a former drovers route. The ancient hedgerow incorporating with majestic oak trees but has seen recent disturbance. This includes the felling of trees perhaps to erect fencing, which appears to have cut off a footpath, as a style was located on the opposite side of the fence. After crossing Bridge Road it is possible to cut through a footpath, which leads to Churchfields Recreation Ground, where several sections have been set aside for wildlife and are managed for their nature conservation value.

Although the majority of woodland is relatively young, maturing hazel trees can be found, a programme of traditional coppicing is undertaken in the winter months, when the trees are dormant, and there is no danger of disturbing nesting birds. The site is about to have its own interpretation board (courtesy of the Environment Trust) with important information about the wildlife, which includes badger, in the hope that local residents will consider the welfare of this animal currently having a hard time. Here we listened to pipistrelle bats foraging along the hedgerow.

If you are in the area, visit The Meadowlands off of the Nigel Fisher Way. This is an isolated remnant of recently developed (former) MOD land. The unimproved grassland had given rise to one of the best meadows in the borough, complete with species of orchid, common vetch, bird's foot trefoil, cuckoo flower, salad burnett, common knapweed as well as cowslips.
Unfortunately, the plot will revert to 'ecotone' flora as it receive influences from local gardens. There are already signs that the cowslips have hybridised with polyanthus' and green alkanet has invaded the meadow. 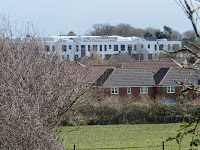 In fact  this whole section of the T.B. catchment and the green belt, are suffering the encroachment of development. This has an affect of increasing the urban gradient which effects all species. One of the problems it brings is one of increased light pollution, which may manifest as increased sky glow in the area.

As owner, the borough leases some of these greenbelt fields for grazing. The problem of overstocking has led to local landowners changing the productivity of their fields, by added fertilisers, to increase the grazing available. This has accelerated the loss of unimproved and semi-improved grassland in Kingston. 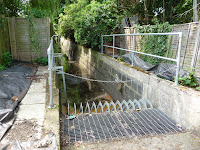 To continue along the Tolworth Brook...........is a journey I take you along with some reluctance. Chiefly on account of the lack of love bestowed on it as it crosses the borough to where it joins the Hogsmill at Elmbridge Meadows. There are views of it as it peeps out from under roads at Cotterill Road and Thornhill Road. 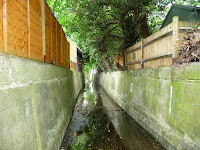 You could live here without even knowing that an ancient river even existed.