The Link below will take you to ‘What’s in your back yard’ which is the section of the Environment Agency website that contains maps of various things.
http://maps.environment-agency.gov.uk/wiyby/wiybyController?ep=maptopics&lang=_e click on this link and then select the ‘water abstractions licences’ button. Then just type in the name of the area or postcode and it should take you to the map. Abstraction licences are a green star, depending on where the water is from. 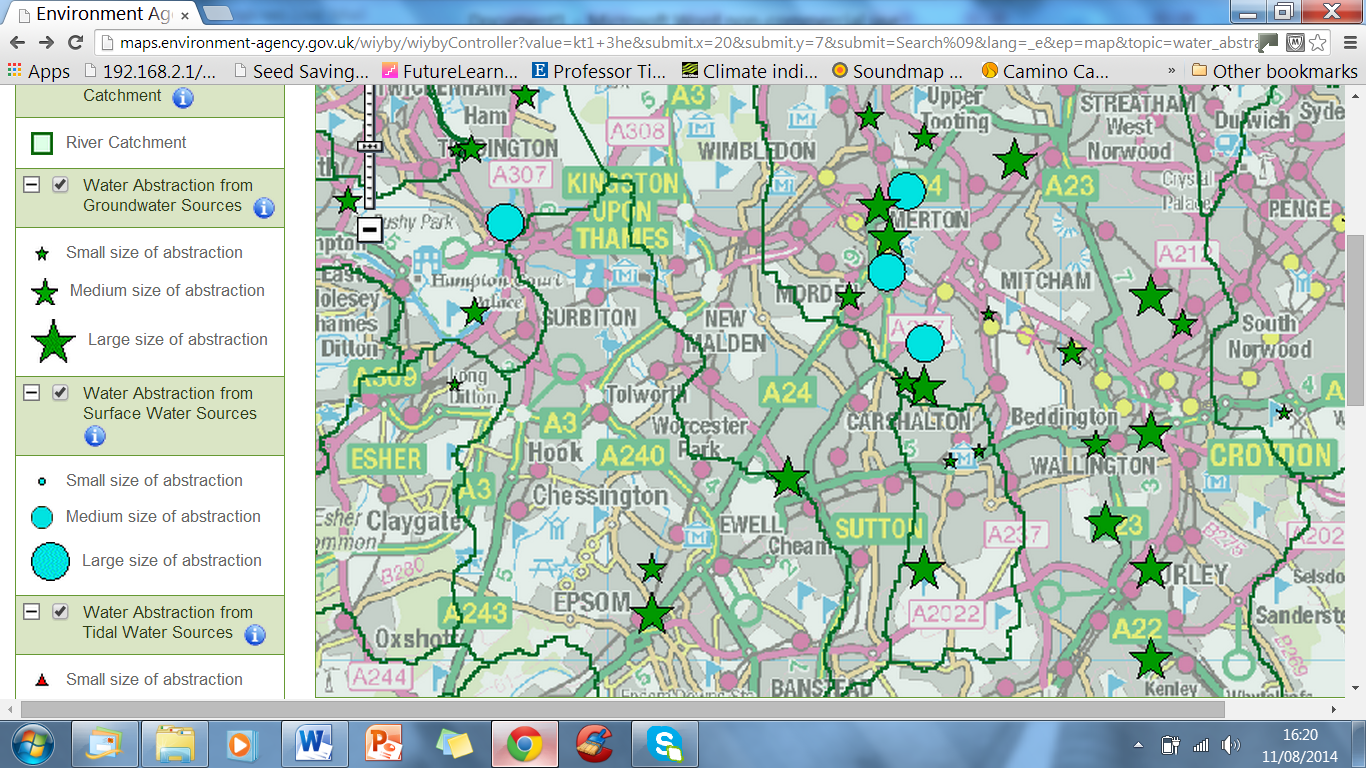 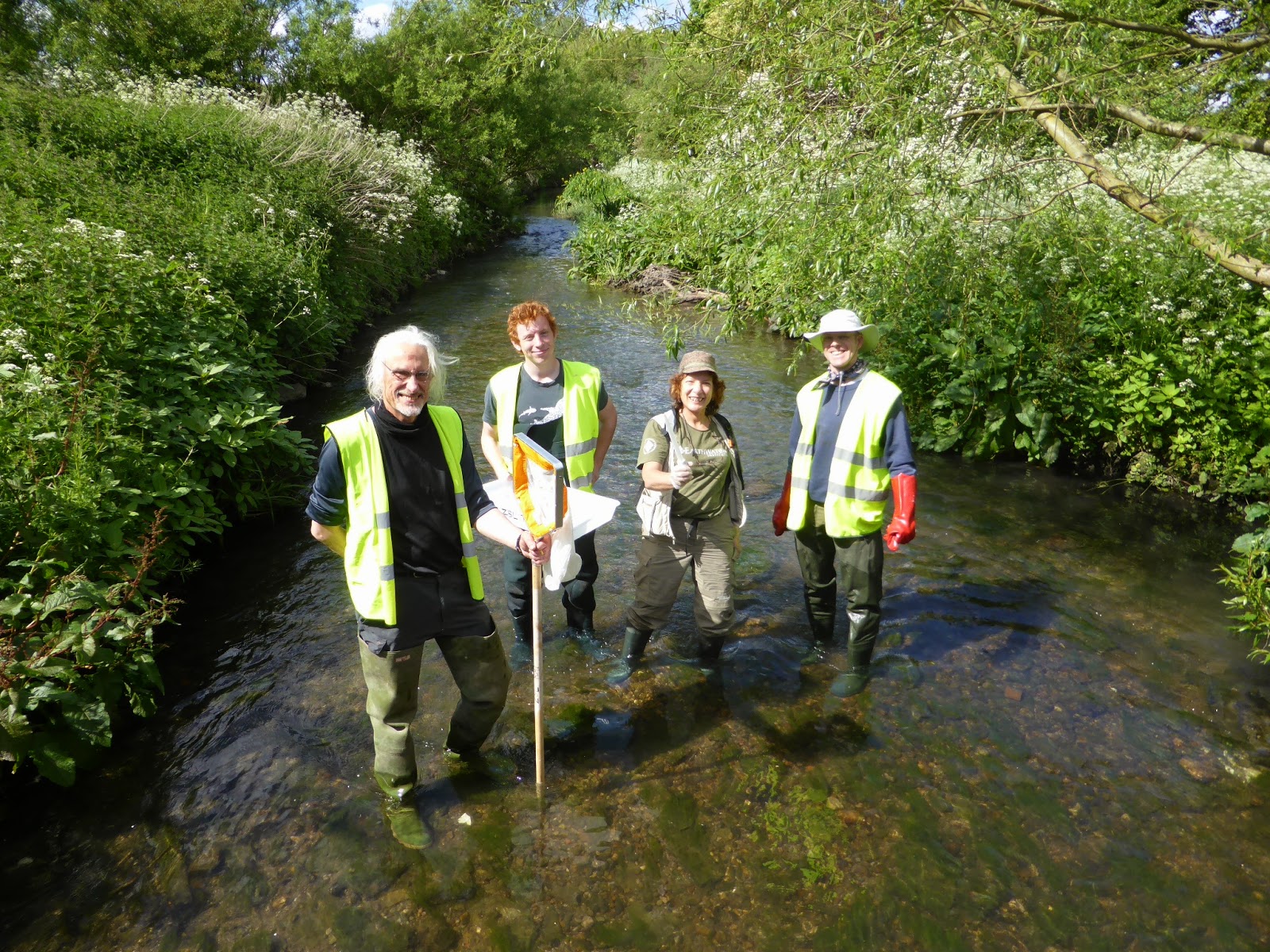 Each month, volunteers along the Hogsmill River monitor water quality, as part of  the River Fly project. Yesterday we found sticklebacks, bullhead (with its eggs under a stone) olive flies and hoglice Asellus aquaticus. The river receives a score based on the abundance and diversity of recorded animals, based on 3 minute 'kick' samples. 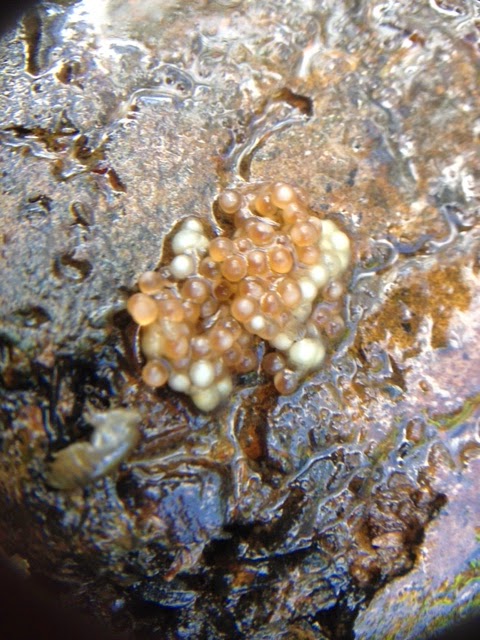 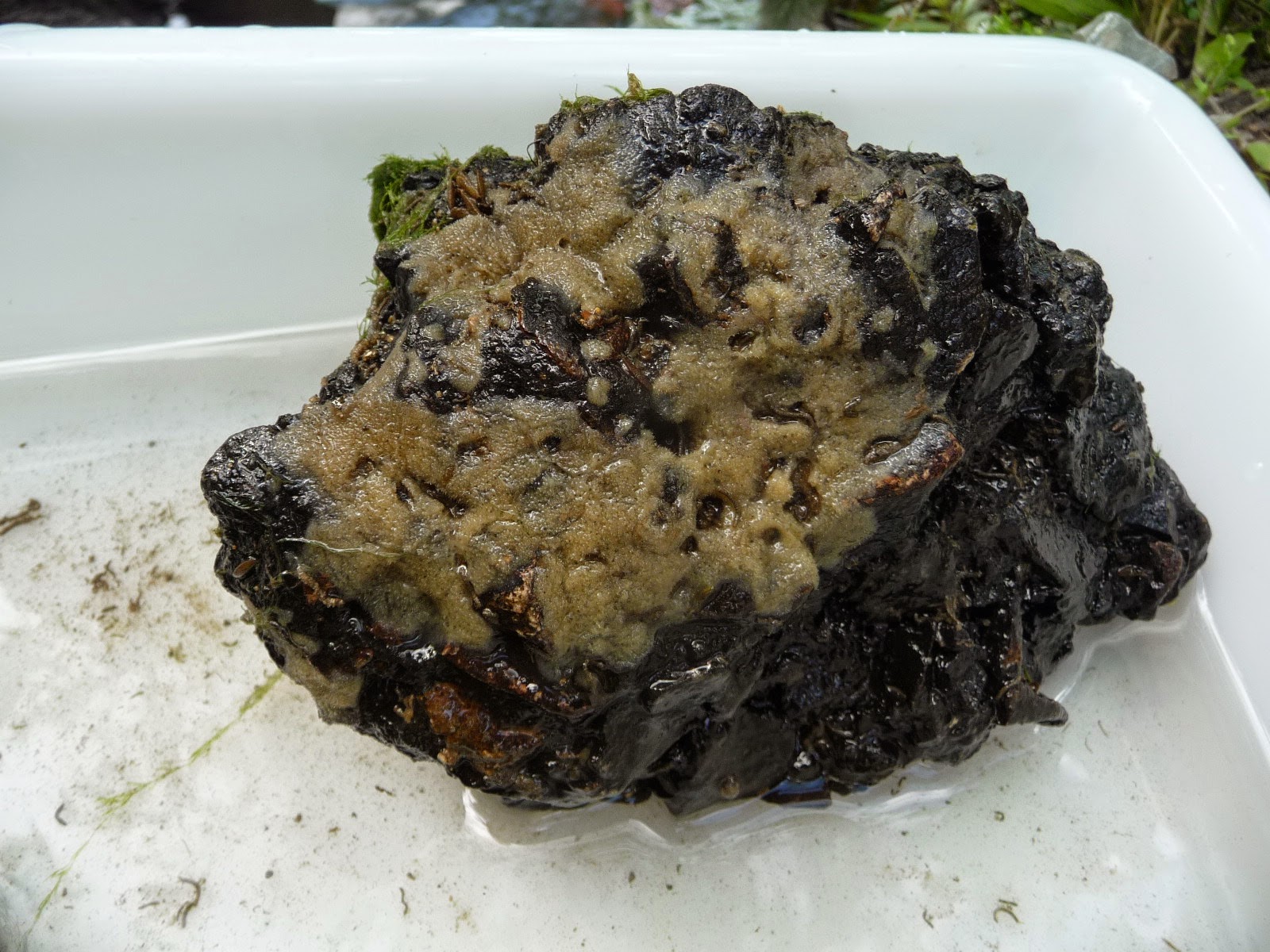 Freshwater sponges (left) were found underneath rocks as well as fish eggs (right). Some eggs may not have been tended too carefully by the parent fish as they were dead (white) and would normally would be discarded. 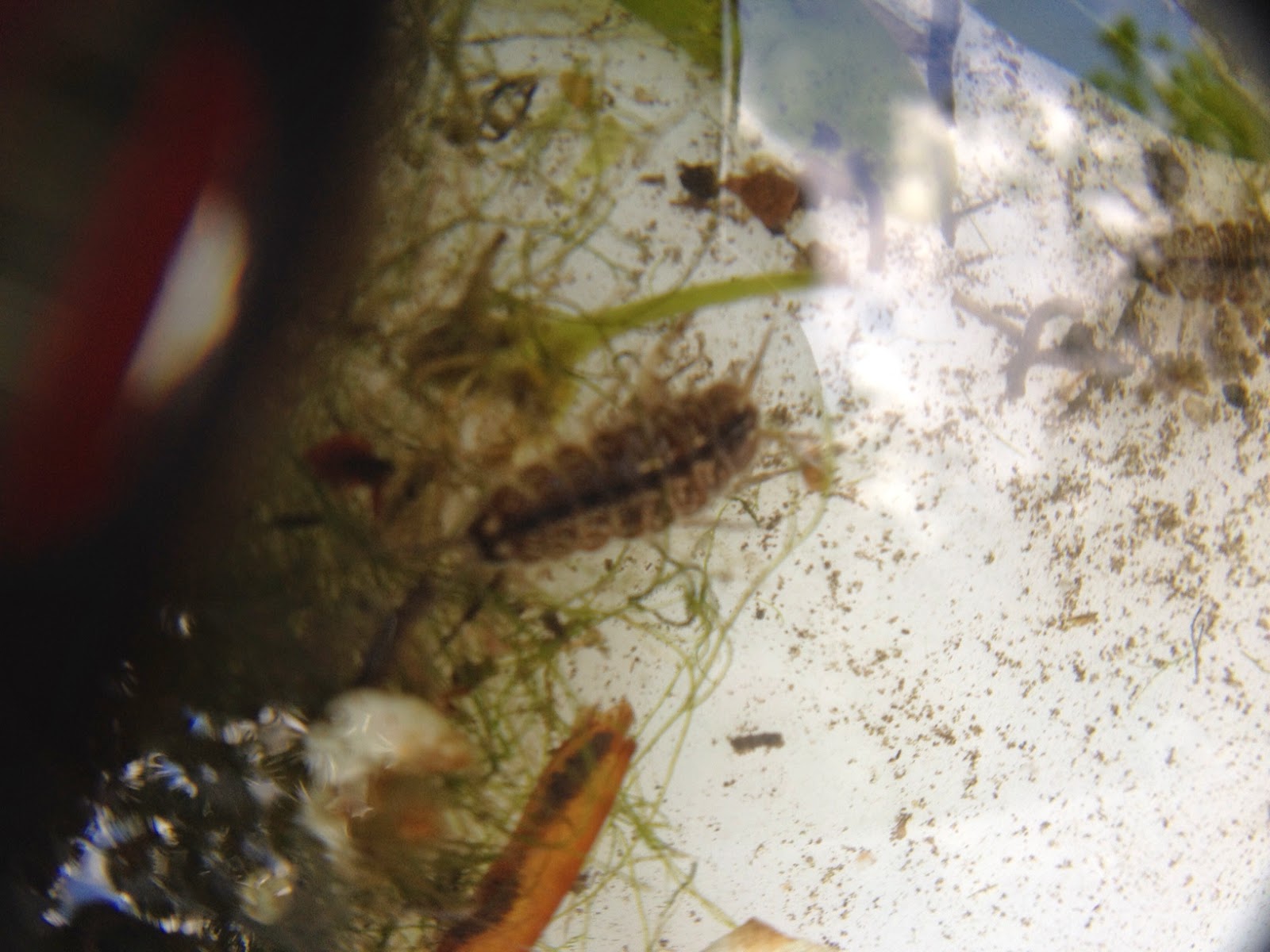 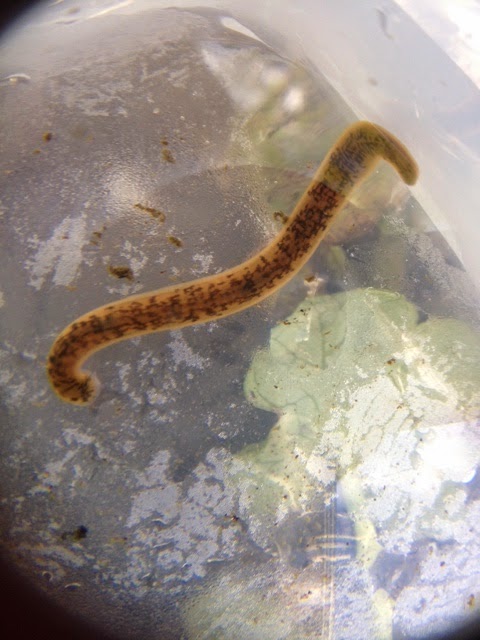 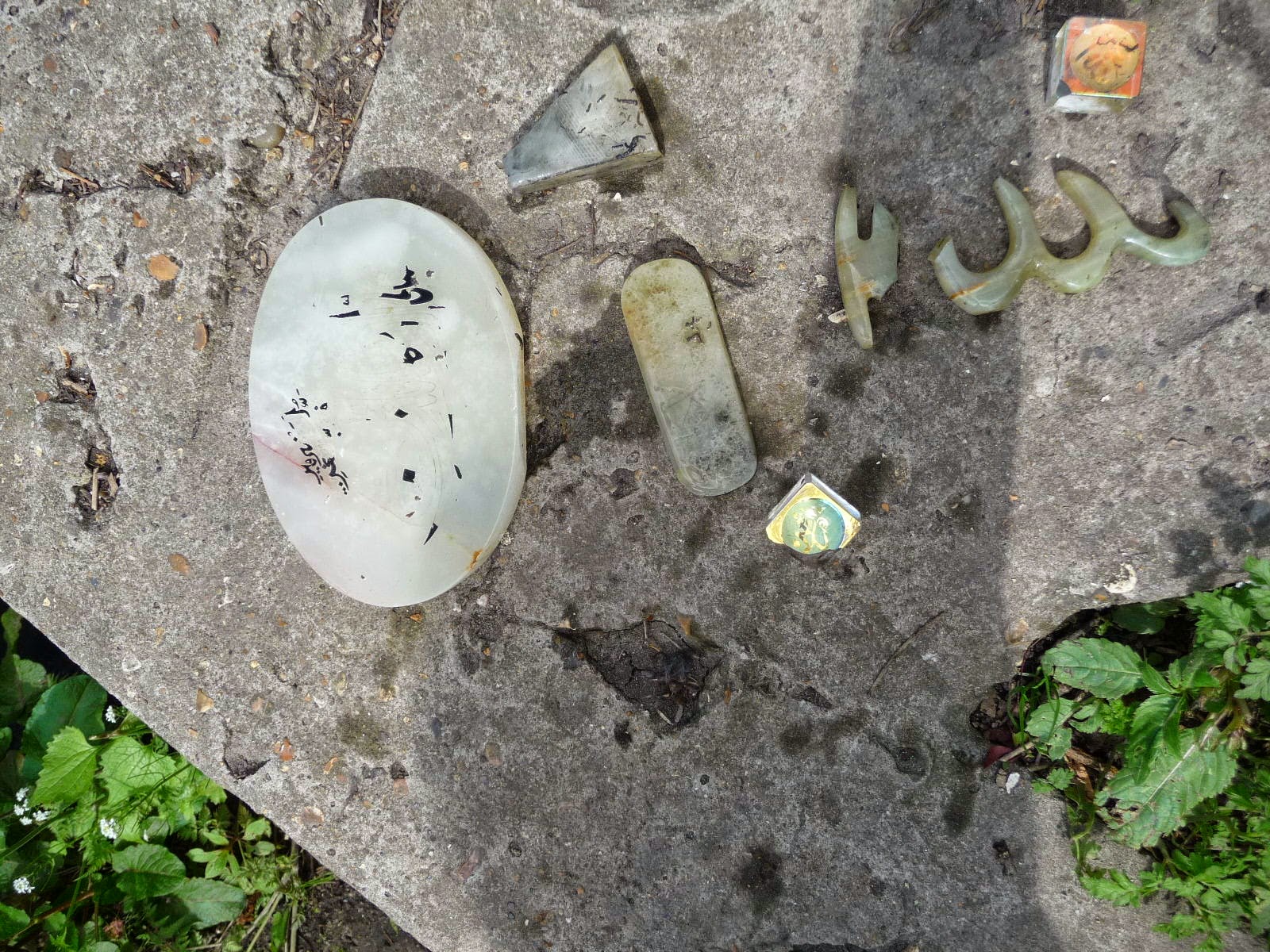 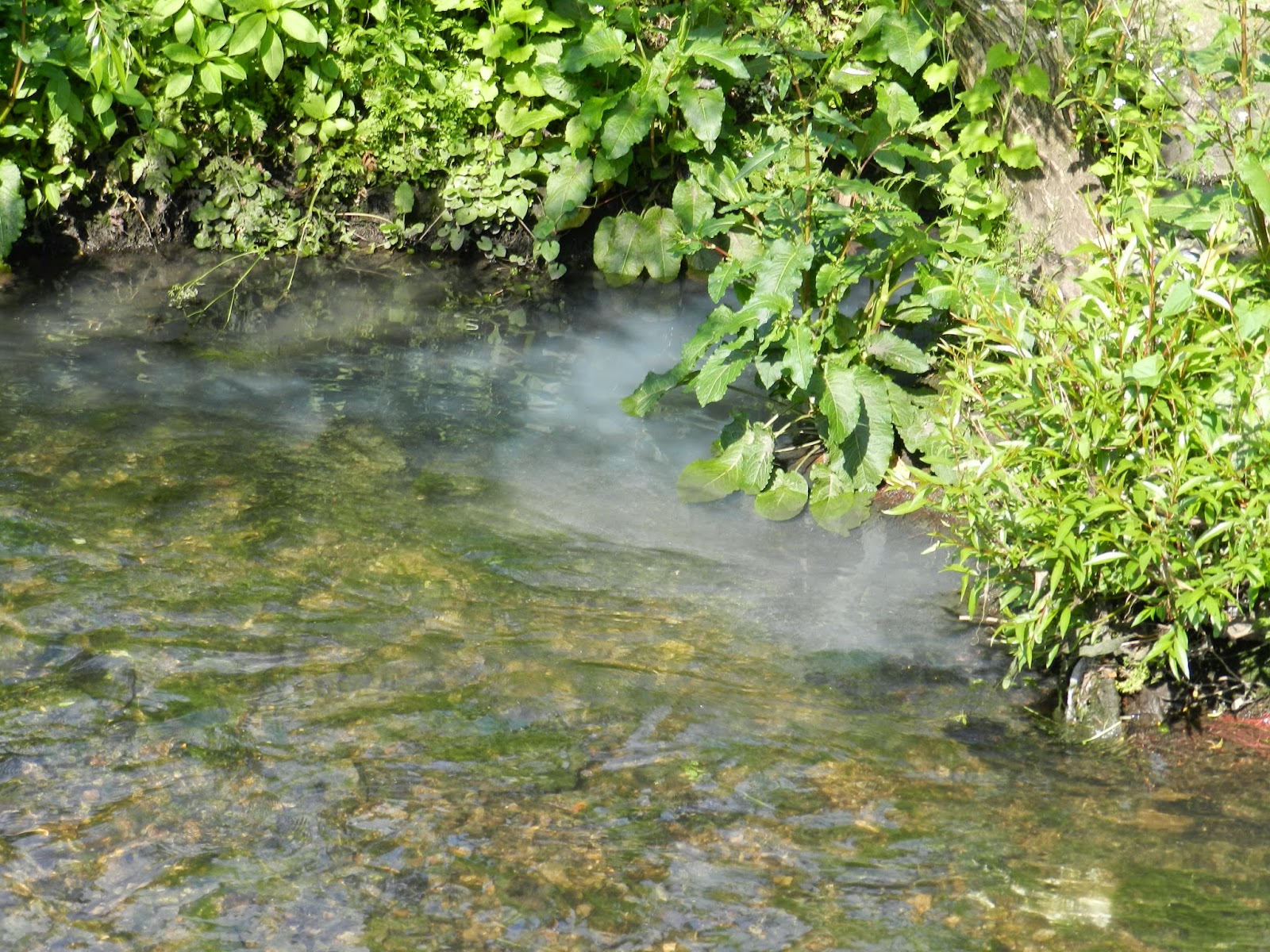 Votive offerings (left) can be found around bridges on the river bed. If you see pollution around the outfalls such as this white cloud appearing from a mis-connected washing machine (Green Lane Bridge) let us know so we can complete a 'Pollution Assessment Form' to send to the Environment Agency. The outfall is full of smelly fungus, which  grows when sewage or other pollutants enter the river preventing the  micro fauna from cycling and recycling organic nutrients.

New Riverbank  for the Hogsmill

Blazing summer sunshine, volunteers and heaps of team spirit arrived to build up a riverbank area next to the concrete wall at Knights Park. Planting will take place in April, see the university website for more details.  http://kubiodiversity.blogspot.co.uk 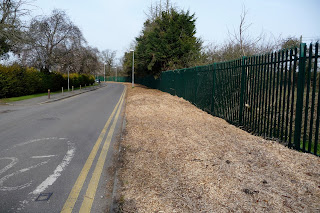 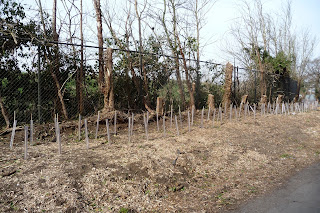 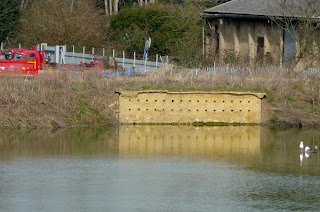 Kingston Council has removed all the trees and scrub along Lower Marsh Lane and created a new double hedge with some standard trees. Whilst creating  habitat, it has removed some under managed and overgrown areas of habitat that were  valuable especially for the rarer insect species. This includes the elm, which was important for white letter hairstreak butterflies.


All of the dead wood has been chipped, which means that stag beetle habitat has been destroyed. There hasn't been anything in the local press regarding these extensive works. Are they connected to the Hogsmill Valley Masterplan (Se item on Core Strategy, 2011 below)

Habitat improvements are under way for this season and many new features have been created. This includes the sand martin bank and two rafts (below).


During  a visit looking from the platform at Berrylands Station (7.4.13) the following were seen: 2 green sandpiper, shoveler, gadwall and kestrel but no sign of any migrants in yet.


The areas which have undergone habitat improvements are beginning to 'soften' and the islands are becoming vegetated.
The left bank is unfortunately dominated by Japanese knotweed which was not treated during 'improvements'.


These cut-ins create areas for fish and amphibians to spawn and hopefully sheltered areas for the water voles, which are occasionally seen

Treeworks along the Hogsmill, 2012

During February, a large number of trees were felled along the Hogsmill river, located behind Kingston Cemetery and at Kingsmeadow. The area is  overgrown and historically (and more recently) has been used as a rubbish dump. The pollarding and clearance of trees (predominately willows) has led to the opening of the river corridor facilitating vehicular access to undertake river corridor improvements.


2 islands have been created dividing the flow of the river and creating riffles and deeper pools. This is the best area of the Hogsmill for wildlife in Kingston and during this visit there were over 35 teal bathing and splashing in the (now very shallow) water.


A magnificent little egret was fishing in the shallows (see white speck in the photo). If the Hogsmill walk is opened to the public and pets (see below) will this become a stretch of the river no different from the rest?


CHANGES IN THE HOGSMILL VALLEY
The loss of a further 7 Hectares of Metropolitan open Land (MOL) within the Hogsmill Valley was debated during the recent Core strategy hearings (September, 2011). We seem to lose MOL in the valley during every review to our planning framework. This green and open land would be used to provide an industrial park, housing, a school and a 10,000 seater stadium as well as additional student hostels. Continuous erosion of Mol is unjustified. We have been developing existing sites in the area (such as Bonner Hill School now a Barrat’s housing estate and Mount school playing fields have also been developed for housing) without a strategic plan for the future and now it seems the solution is to develop the central core.

Poor Ecological value
There is no ecological survey supporting the council’s contention that the Hogsmill Valley is 74 hectares of poor quality land. This assertion within the Core Strategy is a value judgement and not based on comprehensive research and evaluation in the local context. In the local context, it is just as good as anything that we have. If we evaluate our open spaces against neighbouring sites (Richmond or Merton) which have benefitted from management and investment, clearly we will lose everything we have. Any surveys should evaluate features in a local or borough wide context this would have happened if our Biodiversity Action Plan had been implemented. We are at risk of losing our open spaces to multiple uses, which degrade and homogenise our natural environment even further. We have got away with our lack of protection of natural areas (the river banks for example) in the past due to our close proximity to the green spaces of Richmond.

Hogsmill species
There are important features within the Hogsmill Valley, e.g. European Protected Species scheduled birds and overwintering duck species rarely found in the London region. It was an important corridor for reptiles in former years and red listed birds are making a come back. A remnant population of water voles may still exist downstream of Elmbridge Meadows.The Hogsmill Valley Sewage works was amongst the most bio-diverse habitats for birds IN THE LONDON REGION. Some of the bird species recorded are considered as Birds of Conservation Concern (BOCC) and listed as red (high conservation concern), amber (medium concern) [Royal Society for the Protection of Birds (RSPB)]. National Guidance states that these areas should be protected from development. Certain species exist here because there has been no public access. The proposed opening of the Hogsmill walk is for enjoyment of people and will have a negative impact on biodiversity, although it is agreed there is a problem of access to open space for residents of Norbiton. If not handled sensitively with screening along the bank, it could be contrary to the London Plan, which seeks to protect SNCI’s and MOL and river corridors as wildlife corridors.

Protection from flooding
The Hogsmill River is important floodplain land Valley performs an important local drainage function. Its development footprint has increased sufficiently in recent years so that we can see the impact on low lying areas such as standing water on Kingston Recreation Ground and Hogsmill Sewage Works throughout the winter. Most of the flood events in the borough have been alluvial or from storm water except the last, mostly involving the Hogsmill river: 1937, 1947, 1968 and 1974. The Core Strategy proposals do not recognize the importance of the flood storage capacity of the Hogsmill River Valley and too much development has been allowed already. Since the California Road depot, the Mount School Playing Fields, the Waste Transfer Station etc were developed for housing and light industrial sites, there have been more summer spates and flash flooding in the Hogsmill stream and water birds, are washed out of their nests every summer. No new development should add to this storm water run off into the Hogsmill without an increase in flood storage capacity. The proposed ponds will not attenuate water sufficiently rapidly. This is a gamble with an area which is already vulnerable to flooding.

Football Club expansion
There is past correspondence stating that the council will not allow further expansion of the Football Clubs. This correspondence goes back to when the Kingstonians first moved here from Hawkers. Why will we be providing a 10,000 seater stadium for AFC Wimbledon when the Merton Core Strategy makes it clear that they will be returning ‘home’. This was a great concern of residents at the Kingsmeadow Consultation and not addressed in the current Core Strategy document. Development policies should take account of environmental issues such as noise and light pollution. The university proposal for sports pitches and floodlighting near the Surbiton Sewage Works lagoon indicates that the issues of biodiversity are not being taken seriously. This is not in accordance with the London Plan or National Guidance particularly the NERC, (2006)

Cultural and natural Heritage
The Hogsmill Valley has evolved in a piecemeal way, creating heterogeneous areas, some of which act as niches for unusual flora and fauna, including 2 scheduled species of bird (Wildlife and Countryside Act, 1981). The River Corridor has its own designation. There are positive features in the Valley which have not been recognised in pages 56 of the emerging Core strategy as ‘areas of poor quality environment’. There should not be a presumption for developing every nook and cranny, removing every trace of each historical event, every former pig farm, every tatty old shed opportunistically used by a sheltering animal or bird. That is something we should celebrate: not develop, or floodlight or turn into another riverside walk. 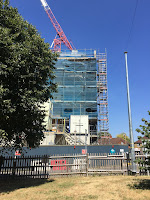 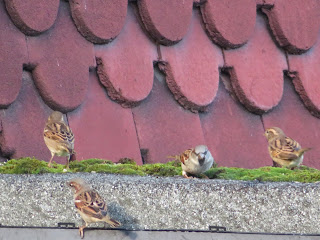 Correspondents Lyse Doucet and Martha Kearney covering the Israeli elections  on this morning's 'Today' programme,  were surprised as listeners 'Twittered in'  comments  regarding the house sparrows chirruping in the background. It lifted spirits to hear happy chattering, a sound once common in all our gardens.
We have lost 12 million house sparrows since the 1970's. Populations continue to be  fragile in some London boroughs, due to the fast pace of development and the amount of  Total Footprint developments council's have been prepared to accept, in order to achieve their housing targets.

Some councils have taken their legal obligations more seriously see February's post -house-sparrows in Ilford but as  kingston-enters-anthropocene on many environmental fronts we need some assurances that there won't be any more losses of colonies, such as at the former gasholder site opposite Sainsbury's, and the Cambridge Road development in Norbiton. Coup…
Read more