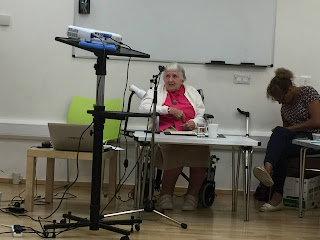 As far as I know, Barbara Webb was born in 1930 and came to live in the family home in Brockenhurst Avenue in 1933 (from a house in Wimbledon). She passed away in the White House nursing home, Malden Road on 10 May 2021.

She lived in Winchester and then Birmingham and came back to live at the family home permanently in 1960, working at Nonsuch High School as a biology teacher. She was already a member of the Surrey Wildlife Trust and later joined the Ramblers in 1977. I met her in the 1980’s as we crossed paths on many wildlife related matters.

Her earliest memories were of the Hogsmill and fields below the church. She spent a considerable amount of time on issues connected to the river including: Six-acre meadow, of course; the stables; and related management and mowing regimes. One of these sites - I remember well was Percy Gardens.

During the war her family had an allotment along the Hogsmill was called Western Furlong (in fact, Percy Gardens). Fairview Homes had an application for high density development on this site, which Barbara opposed and helped resist at the Appeal, leading to a plan for a less dense development.

According to Barbara, artefacts came out of the ground ‘at a considerable rate’, during a pre-development archaeological dig. I understand she washed one of the finds and it ended up in Kingston Museum. During the dig, a leat or ditch connected to the Hogsmill river was uncovered and the site was deemed an iron age hill settlement.

She remembered a path along the Old Malden Lane to Cromwell Road and the Hogsmill pub before the road ‘ate it up’. It would have been the path walked by Holman Hunt and Millais the pre-Raphaelite painters that she so painstakingly researched in her effort to find Millais’ seat when he painted Ophelia at Six-Acre meadow. The former is now in the Tate Gallery and Barbara is mentioned on the interpretation board of the latter.

She lobbied Kingston council on environmental matters, producing a leaflet on the Hogsmill for walkers. Looking back through our correspondence, she researched the original names of the fields on Tolworth Court Farm. She can take credit for Kingston Council employing a ‘Biodiversity Officer’ in the late 1990’s. Before this the posts had been for wildlife rangers, so more conservation related, as ecology was a new field.

Although she wasn’t able to go out on her own steam, she was still active until recently and I took Elliot Newton - who is now Kingston’s Biodiversity Officer - to a talk on Millais’ Ophelia ‘The Lady in the Stream’, at the Malden and Coombe Heritage Society, July 2017. She mentioned the water vole that was originally included in the painting, but later painted out. Elliot was interested in the talk and expressed appreciation and respect for Barbara’s achievements; as it turns out, he is hoping to reintroduce water voles into the Hogsmill Spring 2022.

Last year I heard from Amy-Jane Beer, who was writing a book about Rivers and hoping to interview Barbara over the phone regarding her work on the Hogsmill, including the ‘water vole that never made it to the painting’. She returned to walk the Hogsmill in February, using Barbara’s aforementioned map; I still have a few copies.

Amy-Jane’s book will be published soon, and hopefully we can remember Barbara more formally when the water voles are released next Spring.