April 24, 2020
One of the ambitions of the 'Tolworth Treasure and the Hogsmill Hum' walks currated by Lucy Furlong and myself and featured on Radio 4's walking women was that you can enjoy walking anywhere but you may need a device to help you connect with the area. Walking along the busy Tolworth Broadway was particularly enjoyable when in the company of one of its former residents: Richard Jefferies.

The following short circular walk is around parts of what was NORBITON COMMON and was written in the context of a discreet period of time when Kingston Cemetery was locked (it has since reopened). Alexander Mitchelson, a market gardener who lived in NORBITON STREET - was the founder of the Kingston heritage apple - the 'Mitchelson's seedling'. He had 13 acres of  his allotments at NORBITON COMMON (an additional 15 acres were situated at Kingston hospital at the A308 junction).

Starting at Kingston Road, you can begin this walk through Kingston recreation ground and cross at the pedestrian crossing to join  Dickerage Lane. Enter the footpath at WARWICK ROAD alongside the bridge abuttment (completely covered by hawthorn).

Thereafter, enjoy walking somewhere local but new, notice  features we grew up with. Did we think grass verges and privet hedges would always be a part of our street scene? It is refreshing to walk sleepy streets and cross through multiple alleyways. 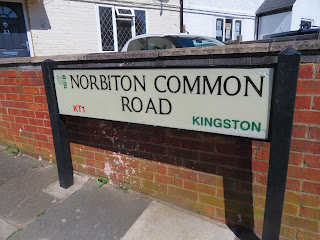 Below is a nice newish developement at WATERS SQUARE, built within those times when we were supposed to be intergrating bat bricks and swift boxes, but none apparent.  It is devoid of wildlife, being overly designed for the car user. It makes a contrast to those terraces and semis with their sparrow filled privet hedges, grass verges with big canopied trees, alleyways that go somewhere and even mature orchards.


As you head back towards the KINGSTON ROAD through the alleyway then there is an old boundary marker and look at the road name opposite and the name of the flats. 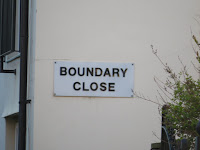 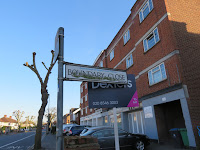 Now you can head towards the CAMBRIDGE ROAD ESTATE: turn left down HAMPDEN ROAD note the former Arrow Plastics factory on the left as you turn into BONNER HILL ROAD.

Look right and see the old laundry stables. Here were kept the  horses responsible for the distribution of the clean laundry to the residents of Kingston Hill. In more recent years it was a perfectly situated as a segregated part of the laundry to keep the dry cleaning portion of the buisness.The following is work in progress.

Turn down CAMBRIDGE GROVE ROAD and note there are 3 informal pathways onto the CAMBRIDGE ROAD ESTATE. There is an old corner shop opposite worth a look. Make your own way around the estate noting the many alleyways that were a a pedestrian circulation system that allowed people to walk to the local shops, park or school without crossing a road. Also known as Radburn lines.

The estate is characterised by a series of cul-de -sacs. These provided car access to the front, while a separate pedestrian network links to back gardens.  see also Wildlife on the Cambridge Road Estate
These were the first methods separating pedestrians and cars. 'Streets in the sky' were also part of the 'design pallette', so that residents got 'Facetime' with their neighbours. Head for WILLINGHAM WAY and you will be opposite the KINGSTON CEMETERY gate. Poke your head through the gate and look left to see the wall of the Old Mill house, once a publishers.


The letter below is self-explanatory and is a record of an attempt to obtain recogniton for the rights of access that have been enjoyed for the last 50 years.

I have been corresponding with your colleague, Jack Cornish about the Radburn lines on the Cambridge road estate, which is to be demolished over the next seven years, although there is no planning application at the moment.

There are 10 north - south and east - west paths that were designed into the estate, that was built c1970. I have lived nearby for 27 years and frequently use the paths that lead towards the town centre, bus stop or the post office. In former years I used the paths that headed toward the local shops.

The Open Spaces Society have identified these urban paths as being the most vulnerable to loss and they will vanish during the regeneration of the estate. I have written about them in a little Chapbook here https://www.ebay.co.uk/itm/143589780932


Council contractors do nothing to the paths. I clear the path of leaves, fireworks and condoms so that people can use them. I often report rubbish dumping to the council. I even painted the edges of the steps below last year, as there is poor light along the path at the western boundary.


I led a group of people around the paths last September, to see how peaceful and vegetated they are. But I have no idea how to get them recognised and acknowledged as the council are going to demolish the site and completely change the layout and there will be no access to new gated courtyards.


I have checked the definitive map and of course they are not shown, I have discussed the paths and other features with the Head of Regeneration, which only serves to give a heads up on the opposition to their scheme. Kingston council will gain financially via the transfer of public land to the private sector, so is little likelihood of them putting these paths on the definitive map just on my submission. Once the planning application is registered I will not be able to make an application on this site so time is of the essence.