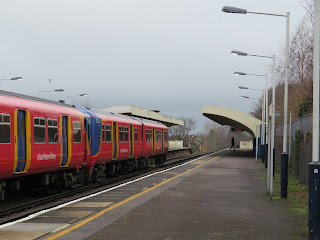 Many of you accompanied Lucy and myself along the drove roads of  Tolworth for a picnic during 12.8.18. Earlier this week Bruce 'of the drove roads' www.localdroveroads.co.uk - arrived at Tolworth Station from his home in a small village at Carmarthenshire. Ironic, as it was the arrival of the mainline railway in the 1840's that made our local trackways redundant for the movement of cattle. 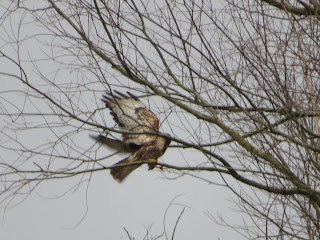 Our first stop was to walk the old Kingston Road to the 'Moated Manor' site aided by some context provided by the writings of  Richard Jefferies - a former resident of  Ewell Road (where there is now a blue plaque above Stack and Bonner). R.J. wrote of the cows walking along the Ewell Road with their heads moving from side to side c1877. This would have been post - drovers, as by then the railways were used for moving cattle around the country, so these animals might have walked from Surbiton Station. 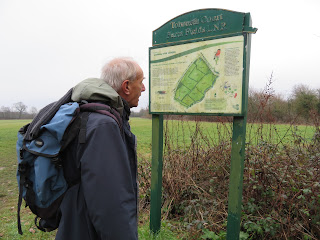 We disturbed the usual buzzard as we opened the gates at the Moated Manor, who soon took off. This was once the dairy of the last farm in Tolworth, where  cows crossed the road twice daily for milking. We are hoping that a small herd of Belted Galloway's will be introduced in the future to improve the habitat. 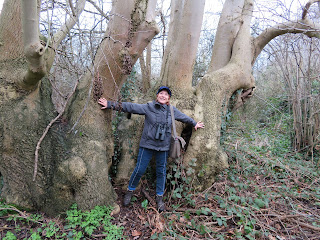 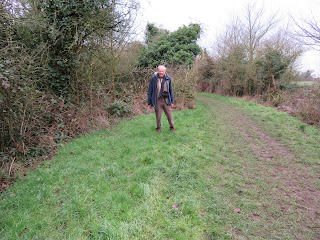 Carefully navigating the A240, we crossed to the main part of Tolworth Court Farm, entering the drove from one of the intersections. Below, Bruce is standing in one of the passing places where we had our picnic last August. The double hedgerow is dominated by elm on the east side. Ivy grows up the suckering stems and when Dutch elm disease reaches its damaging seven year cycle -weakening the structure - so the whole stem topples damaging the line of the hedge. It could certainly do with some TLC, especially as the motorbikes have obviously been tearing around the site, evidenced by the tyre tracks and the muddy path.
Drove roads often followed ancient trackways and sometimes ran parallel to turnpikes in order to avoid paying tolls. They were around 20m in width and were often hedged on both sides to prevent animals straying into local herds, and from damaging cultivated crops. The routes were sometimes way marked with evergreen trees - easily visible at all times of the year - and included holly, laurel, yew, growing freely above the hedge line. It is possible that this was a medieval route taking goods and service between three manors at: Malden Manor, Talworth and the Grapsome, our final stop of the day. This is the south-western foot of the farm where the oldest trees are located, in this case ash. Remember our pilgrimage in the summer and the hunt for bullfinches?- this is the best place to listen out for their wistful calls. 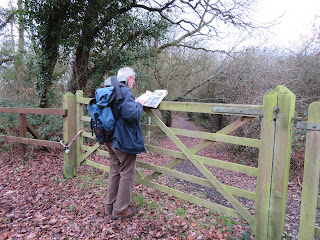 Green Lane
Here Bruce is reading the information contained in the London Ecology Handbook for Kingston 1992, about the southern arm of the drove, as it  contines along  Green Lane, Chessington. The 12th  century church located at the top of this road, has possibly the most intact elm hedge. Trimming has meant the hedge has never made very much  old wood with its corky bark protrusions that facilitate the ingress of beetles  that carry the fungus. 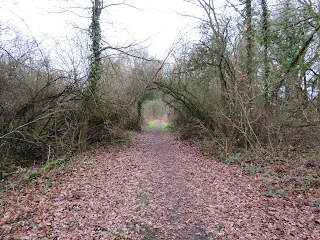 At the end of the Green Lane drove lies Chalky Lane. Drove roads are often called Lanes or Ways such as Rushett Lane, Fairoak Lane. Drift was an old name for drove and any name with the prefix 'Ox' such as Oxshot or Oxted. Droving inns were called 'butts' and had adjoining paddocks of about 8 acres where the animals rested on their journey. Scots pine and larch were also used as way marks along the route and clumps of these trees also denoted stopping places at inns and farms, the word 'clump' being associated with drover's roads. 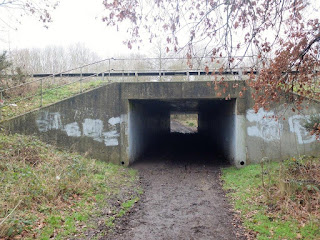 to the Grapsome
Our third stop was at Mansfield Road walking the two - stage path parallel to the Ewell by-pass. We crossed to visit the Grapsome and the source of the Tolworth Brook. There are now few indications of the trackways once described by Richard Jefferies who came this way to visit Claygate. These are not necessarily ancient. 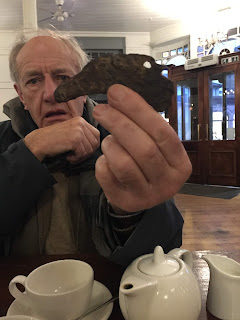 Bruce and I stopped for a debrief at the Langley (formerly Liberty Bell) along the Ewell road (where cattle were driven from Surbiton Station). He produced a cattle shoe with an apparent nail hole. These were only fitted on animals for long journeys, possibly their last journey to the London market. As they have a cloven hoof the shoe is in two parts fitted to each toe. Eight shoes would be required to be fitted on each unwilling animal, inevitably relics still occur along former drove roads. 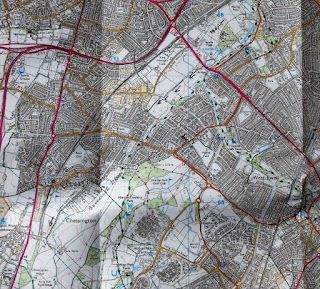 Bruce's map of our journey marked by arrows

As a footnote: during the Cold War of the 1980s, the Russians recognised the importance of the drove road across TCF, including it in their very detailed map they made of the region/country/world. The brown line across the farm below indicates the route was suitable for vehicular access and had good connectivity. The black blocks indicate Government or strategic buildings. The Hogsmill is shown as a non-navigable river, the mature trees are shown revealing a level of detail not provided on OS maps. The book of the title below is available for purchase https://redatlasbook.com/and a link to the map viewer is here mapshow/London 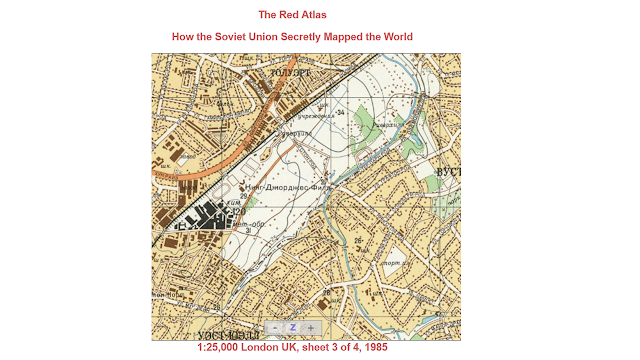