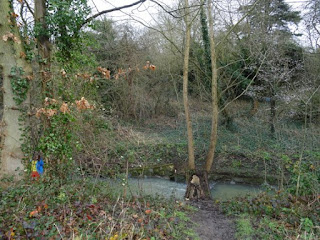 Four generations of my family have played and spent time walking ‘Over the Fields’, as we refer to the stretch of land along the Hogsmill. My paternal grandparents moved to Tolworth from Wexford, Ireland, in the 1940s, and these fields, back then much more substantive and less developed, and in some places still farmed, were an important reminder of and connection to rural Home for them.

Two years ago I started a writing and walking project with my father and son accompanying me on regular walks, where we talked about my dad’s experiences of playing in this space as a child in the 1950s, and where my son has had a chance to experience and get to know the space himself. I documented the walks with photographs, and then began to write poems about some of my father’s memories, my own memories, and our new experiences of walking and spending time there. 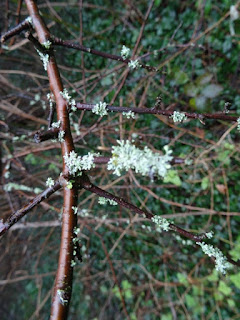 The poems, photos and research eventually took shape as a poetry map, which was published last September and launched with an impromptu walk with friends and family ‘Over the Fields’, where the poems were read in the spaces that inspired them.Since then we have continued to go for walks, although not as often over the winter months, and I have spoken about the map and read some of the poems at various events, which has been great fun.


Yesterday we went for a walk in the local greenbelt close to where I live. This is the Hogsmill Valley and Hogsmill Open Space, greenbelt land bisected by the Hogsmill River, on the boundaries of Tolworth, Malden Manor and Old Malden.


At various points along the river the water seems to slow down to a cloudy meander and then suddenly rushes along again, this presumably determined by its course, width and depth at that point. The London clay mixes with the water giving it a blue/grey/green opaqueness in places, and in others it is clear and easy to see the bottom and occasionally spot stickleback, minnows and chubb, but not at this time of the year.

We cross the river and turn right, noticing the rows of brown thistle
heads remaining from last year. My son thinks that someone has come and cut down lots of trees, bushes and undergrowth. My father explains that this is what happens in the winter, many of the plants die back completely, leaving a barren view to the river on our right hand side. I point out the new buds on the trees; the fresh nettle leaves springing up, with dock appearing next to them. This is the first time he has been old enough to make these observations for himself and to take on board the season’s change in a consciously experiential way, even though we’ve been walking here for years.

I take photos of the burgeoning blackthorn blossom; we walk under the railway bridge, Sam spots some new graffiti: “Granddad, look! It says “Poo”!” This becomes a theme as we continue along past ivy and lichen covered trees; my father complains about the ever-present bags of dog mess carefully tied onto or slung into and hanging from the branches of trees. They are an unpleasant and sadly growing feature of our walks, and I wonder what might help dissuade people from doing this?

We stop briefly at the pollarded willow where Sam has climbed many times before, which was cut back to almost nothing last year, and is now sprouting new growth but too slippery to climb on. Drops of water hang suspended from the tips of the new willow, each one containing a tiny reflection of the wintery view. We decide to cross back over the river at the second bridge and head down a path and over a tiny wooden bridge spanning a brook and into the trees, many of which are budding and already coming into leaf. After finding a ‘good climbing’ tree we wend our way through the tangled trees, which are growing at strange angles, squashed into the space, and eventually come out into Six Acre Meadow, which is not as marshy as usual, but still muddy, and head across to stare once again at the sign which denotes where Millais painted his masterpiece, Ophelia. The sun suddenly comes out and illuminates the field, making everything suddenly more cheerful, and less monochrome.

Sam finds his way down to the riverside. It is narrower, and the water is deeper and faster here. He wanders about and then tries to edge his way back before the inevitable shouting of: “I’m stuck!” can be heard through the trees. I look at the scene and see the Autumn- brown crackly oak leaves to the left, still on the tree, and opposite, on the other bank on the right hand side, a blossoming blackthorn. The tension between the seasons seems encapsulated here as the water rushes by: what was and what is, and what will be, and in the middle of it the water, all bathed in the pale sunshine of the last day of January.

Short Biography:
Lucy Furlong’s map, Over the Fields, was published in September and is available from http://www.lucyfurlong.com

A new piece of work about Over the Fields will be on display as part of the photographer Bill Mudge’s exhibition of his project 20 in 15, at the Mine gallery in Carshalton Village from March 5th – 27th http://www.mineonline.co.uk/

Lucy’s writing has been widely published, and she performs her poetry nationally. Her first poetry map, Amniotic City, was featured in The Guardian. A collection of her poems, clew, was published by Hesterglock Press in 2015. She teaches and lives in Tolworth.
6 Acre Meadow Hogsmill Hogsmill fish Lucy Furlong small teasel Dipsa pilosus

Seething Wells draining 2017-8 Do you ever wonder what happens to all those blogposts you created online over the years or the photos you post on social media? Several  blogposts and photographs belonging to myself and others have ironically been used to support a regularisation application by an agent for an offshore company. The application 20/00627/CEU is a retrospective process to show that the Filter Beds are a reservoir. They are no longer, it is claimed,  'filtration beds' as the substrates used in this process were removed by Thames Water before 2010. Further, it is claimed. as the Filter beds have not been drained since 2010 - they are only a reservoir - and this has  been the case without interruption for 10 years.   'The Application seeks a ‘Certificate of lawfulness of existing use’ under Part 191 of the Town and Country Planning Act (1990). Class B8 – Storage or Distribution.To satisfy the requirements of Part 191(2), this Application will demonstra
Read more

Initially, this circular walk should be undertaken anti-clockwise to avoid getting lost. The basic  Kingston - Berrylands - New Malden - Kingston, takes an hour unless taking side-options. Begin at VILLIERS ROAD, at the junction with the Fairfield, and walk to LOWER MARSH LANE; en route walk down the riverside along HOGSMILL LANE and see new hedge planting undertaken after a group shifted a ton of rubbish. You can see bats here all through the winter as warmed (treated) sewage effluent, generates a lot of food. There are several birds to look out for, as you reach the quiet dead end at the palisade fence (marking the cemetery): grey wagtails, mallard, coot and moorhen, even cormorants  perch in the poplar trees alongside the dump.The 'lucky' may see a kingfisher; they can even be seen outside the Guildhall depending on the time of day. A mouth full of midges assures you are in the right place. grey wagtail From LOWER MARSH LANE, there is an option of walking around
Read more

Oaks and maples Cambridge Gardens 2019 Street trees can often be the most beautiful objects in our streets. They are important to their communities as well as having environmental benefits. They are a living history in our landscape and can have particular connections. They may be fragments of a previous landscape incorporated into a modern street scene, such as the oaks at Cambridge Gardens once  part of the Duke of Cambridge's estate.  A great read with information on how to research street trees is a  History of Street Trees by Dr. M. Johnston. New London plane trees CRE 1976 Beech tree, Chesterton Terrace 1976 Studies show that the difference in local tree cover can reflect the various socio-economic groups. In Victorian times middle class areas were planted with many street trees or had higher quality front gardens than working class districts; now referred to as 'green equity'. It can be demonstrated by looking at old photos of t
Read more