What's over the fence? 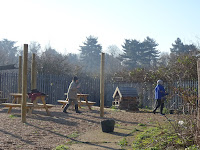 Whats happening over the fence?
Could it have been the continued improvements at the Hogsmill Sewage Works Nature Reserve, where  a dedicated group of volunteers were filling up the  bird feeders. 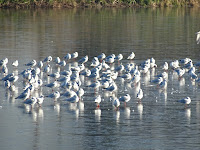 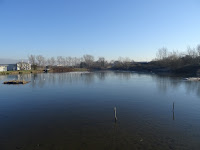 Or could it be the birds on the lagoon (that had completely frozen over after several nights of frost). It was funny to watch the birds walking on ice, which seemed much larger when their entire bodies were not half submerged.

The current large gull count is an  opportunity to practice gull identification especially for those who went to the excellent talk  at the Surbiton and District Birdwatching Society given by David Darrell-Lambert  entitled 'The Easy Way to Identify Gulls'. David is an acknowledged bird identification guru known as Birdbrain. He has had photographs published in a number of specialist journals. He has also appeared in Radio 4's
Questions, Questions, Thames News and has made appearances in the Telegraph.

So was that what was over the fence...... or might you have to wait until the next post!