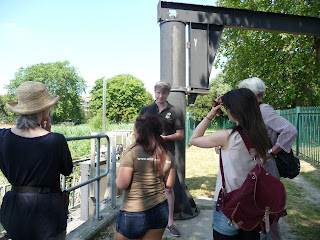 Another opportunity to view a Thames Water site, which will be managed for wildlife, occurred this weekend in Hackney. This was at the open day at 'Woodberry Wetlands' or East reservoir and our guide was David from the London Wildlife Trust. His opening statement was that 'we want to change peoples attitudes',  we need to engage local people quickly to make sure that they realise, that this is a nature reserve and they cannot bring their gazebos, barbeques and sound systems here'. Nor is it possible to bring dogs. This is an opportunity for local people to have a rare glimpse of a Thames Water operational site in the east end of London. Thames Water are about to hand to the London Wildlife Trust, the annual contract for managing the site and for the first time the reedbeds and grasslands will be cut on a regime that will have maximum wildlife benefit, while complying with the requirements for Reservoir Engineer inspections etc. 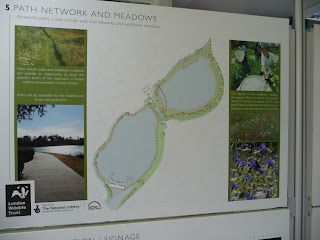 Health and Safety issues will mean that new paths leading away from hazards are in the process of being created. Funding streams have been identified, which will help local people gain accreditation to obtain Brush Cutter licences, so that they can manage the nature reserve. Local schools are already attending an outdoor classroom where ~30 pupils are accommodated at Key stages 1-3. Plans are to include A level environmental education courses. In the future there is potential for generating income for the site, by the inclusion of an Archimedes Screw at the intake from the New River, which could be undertaken by a local Community Interest Group . 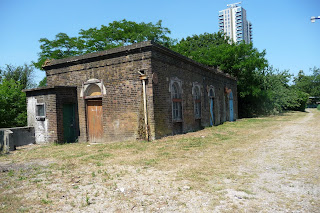 Unlike the Sand Filtration system at Seething Wells, this  system  cleansed the water by chlorine gas, until the 1980's. See left the Grade 2 listed Gashouse, currently sliding down the embankment and in a poor state of repair. In this, it bears similarities to the small pumping station  on the wharf at Seething Wells. The windows and roof have been changed, yet there is a lot of excitement and interest in the restoration of this building, especially the  a small railway, which runs a short distance from the building to the gas pipes at the edge of the reservoir. 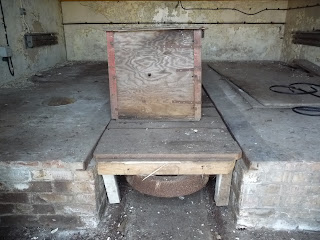 The Gashouse will be a visitor Welcome Centre with an awning to extend to an outdoor cafe area. This was a hot topic among visitors who felt that we are awash with cafes and it would detract from the nature reserve. David agreed that the cafe would  only 'wash it's face' financially but would engage many people who would not  normally come into contact with nature. Inside the building is the Gas Trolley (left) which transported the cylinders along the rail tracks. The pipe work is still present throughout the waterbody, although no longer used operationally. However it is now important for perching birds and the Wildlife Trust see these heritage features as very important for wildlife.

Also planned are DDA compliant (2m) hoggin paths, a floating walkway, new bridge, signage (see below). There is already interpretation boards and a small allotment garden with an apiary which are outside the nature reserve. 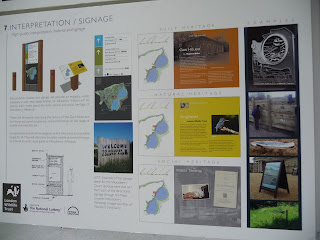