WWT and the 'Sanctuary' Tale 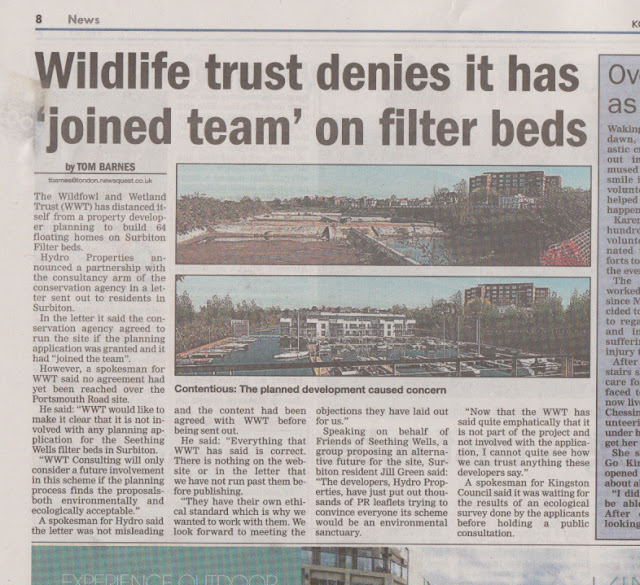 Early this morning 10,000 homes in the Surbiton area received a leaflet through their door, which stated that WWT Consulting had been enlisted by Hydro to support its application. In addition, The developers claimed in today's Surrey Comet, that WWT will be running the wildlife site at the Filter Beds, which is to be known as the Sanctuary. WWT were unaware of the Hydro leaflet or the Comet article and have issued the following statement.
WWT would like to make it clear that it is not involved with any planning application for the Seething Wells filter beds in Surbiton.

WWT does work with developers, through its consulting arm WWT Consulting, to provide solutions in the design and construction of future wetland landscapes, solutions which enhance wetland habitats for wildlife and people.

As such, it has spoken with Hydro Properties Ltd, the developers behind the Seething Wells planning application, about possible involvement in a range of future projects.

WWT Consulting is not part of the project and not involved with the application.

WWT Consulting will only consider a future involvement in this scheme if the planning process finds the proposals environmentally and ecologically acceptable.

Footnote: It was already a beautiful wetland site before the developers twice drained it during 2011.
The Sanctuary WWT