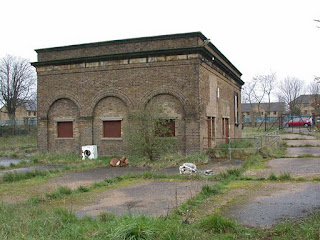 The Pump House: This is the largest structure on site and is designated a Building of Townscape Merit. It has a pyramidal slate roof, used by roosting bats from time to time. There is no roof void and the slates are backed by wooden planks and plasterboard. Internally there is one main room, partitioned into 6 small rooms and a larger operational area. There is a deep shaft containing 2 wells below the building and 4 wells between the building and the Portsmouth Road. In the literature they are known as’ deep wells’ and sometimes ‘deep chambers’ of which there are 24 on site. During 1998-2000, they were covered with cast iron plates, which had rotted and it was sometimes possible to watch bats emerging from the ground.Thames Water replaced the hatches with heavy duty, steel hatches during the end of 2001 (before the Inspector’s site visit at the last Pubic Inquiry). The wells are vertical brick built shafts, ranging between 2-3m in diameter, with groundwater at approximately 4-5m below ground level. The wells appear isolated from each other apart from a connection via a deep water filled culvert (visible at the bottom of the wells) running north to south from the Pump house. Drainage pipes exist in the walls. 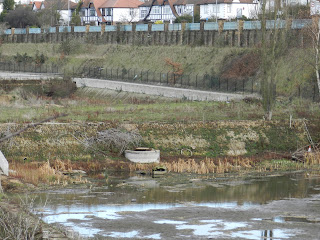 There are seven rectangular filter beds, which have been dug to a depth of 4m. These are connected by an underground system of pipework, which extends some distance outside the site. This long view (left) indicates: the Grade 2 listed blue railings c1852, service road, the weirs (one in the corner of each filter bed, chambers and slopes down to the beds. Note the horizontal brick courses on the 45degree sloping sides of the Filter Beds. The same style of brick  work is evident beneath the ivy growth on the 4m high western bank (not shown) of the Filter Beds. 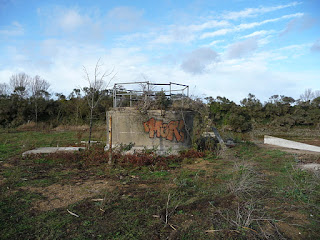 Indicates one of the shafts or chambers  previously stated to have high local ecological value. Due to missing mortar and brickwork there is clear access to the structure. Note the developing reedbed, which was cleared by cutting machinery during October, 2011, in order to facilitate digging of inspection pits and boreholes.
Weirs  appear at the corner of each of the Filter Beds (although they are heavily vegetated in summer). The largest is the intake (most likely with trash screen) at Filter Bed 1, where water enters to be piped to the pumping station. All are features of ecological value (resembling caves) and may allow bats to enter the system of conduits and wells. 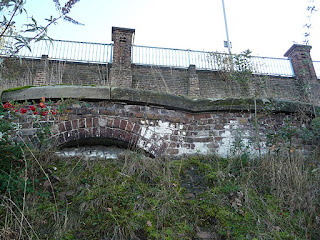 According to documents (LF&P2) this construction allows access to an area known to contain redundant shafts and pipework, which used to carry water from the filter beds to the old water treatment works on the other side of the Portsmouth Road. The specific functions of the structures below are not known but the term deep chambers is used to describe them in literature of which 24 are known on site.deep wells and there are at least 4 structures similar to this on site. They are well constructed and have obvious ecological value due to the ill- fitting concrete lids and open jack arches 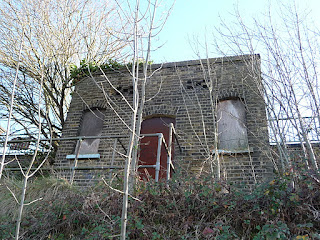 Steep steps exist to the small brick building on the southeast side of Filter Bed 6. In the last ten years the roof has caved in, the windows and door have been blocked up. This building, including the door was painted in the same blue livery as the railings and was operational until the 1970’s and intact until 2000.There is a small pill box construction on the western bank, whose function is unclear.