December 19, 2018
Today's radio had details of an unfortunate court case, which included the headline - grabbing news of the naming of a child 'Adolf'. Names carry powerful connotations and can be imbued with deep significance; the couple who named their son after Hitler were convicted for being members of a banned group known as 'National Action' and were sentenced  to prison for between 5 - 6 years. I began thinking of the power of bird names, either because they are inherently beautiful, have evocative songs such as the skylark, or because of their rarity.

When we hear 'Peewit' we mean the Lapwing  or the  bird in the photograph - currently one of only six - but from an original flock of 200 regulars only ten years ago, at the Seething Wells filter beds, and now amongst the rarest bird in the borough. Richard Jefferies writing on "Nature Near London," (1888) noted that 2,000 lapwing overwintered on Tolworth Court Farm. I wonder if there is a site in the country that still holds such wealth today. Although there were innumerable when I was a Fen child  - their Winter numbers replaced by Spring cowslips -  are now permanent skate parks and frozen food outlets.


Names of tracts of land can also conjure up powerful images such as Leith Hill, Box Hill, Lodge Hill, both because of their beauty and their hard won reprise from  destruction (from fracking or housing development). As new ribbon development started eating at the countryside after WW1 and worried about the urban sprawl, The Campaign for the Protection of rural England (CPRE) first proposed the Country Code in 1934.


Octavia Hill first coined the visual-phrase 'Green Belt' in  1882 and it was Patrick Abercrombie designed the modern day Green Belt ring of a width of 5 miles around London. Housing was planned for the future on designated areas of white land now all used up, see more and about John Gringrod

Equal to Green Belt and of significance to London is our Metropolitan Open Land (MOL); a self-explanatory name for an area of strategic open land or water. The London Plan  2016, policy 7.17  states “The strongest protection should be given to London’s Metropolitan Open Land and inappropriate development refused, except in very special circumstances, giving the same level of protection as in the Green Belt ”.


Names that are self - explanatory though much less catchy,  are our 'Sites of Importance for Nature Conservation': a bit of a mishy-mashy of SINCS or SNCI's of various grades. There are three kinds of site,  chosen on the basis of their importance. This is an attempt,  to protect the best sites in London, as well as provide each part of London with a nearby area, that people can access to enjoy nature. Their choosing- by the London Board of Sites - was a focused and intricate process, based on the surveys undertaken by the London Ecology Unit in the 1990's or something like that -it fades in the mists of a different time.


So 'Sites of Metropolitan Importance for Nature Conservation' SMINC's are those sites, which contain the best examples of London's habitats, sites which contain particularly rare species, rare assemblages of species or important populations of species, or sites, which are of particular significance within otherwise heavily built-up areas of London.

SMI's include not only the best examples of each habitat type, but also areas which are outstanding because of their assemblage of habitats, for example the River Thames corridor, which contain not just the River but the adjacent grassland, pasture, scrub, woodland and 'reservoirs'.

Sites of Borough Importance: These are sites which are important on a borough wide perspective.
Only those sites that provide a significant contribution to the ecology of an area are identified such as the Portsmouth Road filter beds at Seething Wells.

When we put these names all together - like an algebraic formula in a quadratic equation-: rare, important, evocative, red-listed and priority species, axiomatised with designated SINCs with MOLs next to SMINCs, why do we get this? 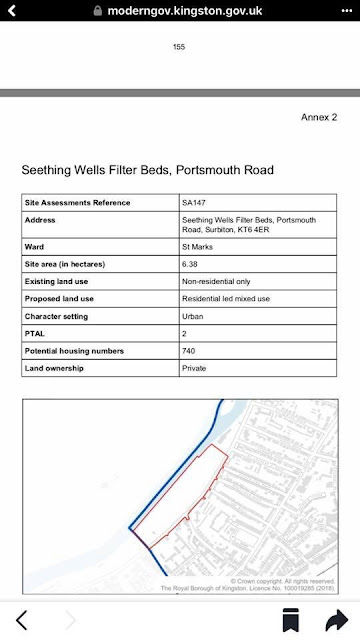