I have written several posts looking at the outcomes for biodiversity, particularly at infill and infrastructure developments in Kingston. These include: 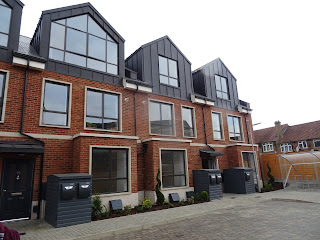 In addition, comments have been sent to councillors, planners etc. regarding general loss of biodiversity at these and sites.

Perhaps it's time to draw a number of conclusions so that we do not make the same mistakes at Cambridge road estate and linked sites: Kingsmeadow and Cumberland house

For this investigation,  ecological surveys were obtained for the schemes (usually by FOI requests). The surveys attested to the protection of certain habitats and species in law and policy; and a requirement for the Mitigation Hierachy to be applied; along with Net Gain for biodiversity as per the National Planning Policy Framework.

The final Ecological Recommendations have were then matched against the planning conditions and the sites were visited post-development. On no occasion were the results favourable. Usually, the recommendations were not followed and there was:

and a retention of:

Some of the losses have been Mega; in the London Mayors Annual Review 2017, Kingston featured as having the largest loss of a protected area of land of the London Boroughs (2 Ha of Metropolitan open Land at Tolworth Girls) and now LIDL HQ at Jubilee Way must follow a close second.

So why has this happened?

Planning conditions have only paid regard to the Landscape Conditions; landscaping has often ignored the biodiversity reports. These may have been written five years before the Landscape Plan had been submitted for the Discharge of Conditions.

What should be done?

Perhaps the following could assist:

Have you a good news story of where a development included some tangible biodiversity benefits?

I only know of only one site in Kingston.