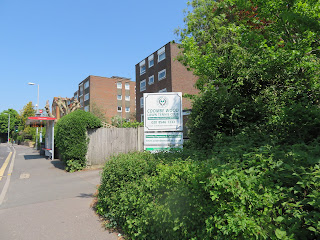 Another potentially damaging application affecting wildlife corridors, trees and the natural environment. This objection has been written by a colleague. There has been no Ecological Assessment submitted with the application and it is not made clear which trees will be lost. I have added photos of the archaeological interest referred to including the watercourse not mentioned in the application.

A. Health and Safety

ii) the proposed front entrance to the path (Appendix 2) appears far less safe than using the current road - the proposal routes the path immediately behind the bin store and a 2m hedge (!) so that pedestrians entering and exiting would disappear from view almost immediately.

iii) the only vehicles on this road are presumably service vehicles, and those of staff or club members, so the current shared road should be low risk. If members are driving too fast, perhaps traffic control/calming measures might be more appropriate, allowing more natural habitat to remain.

iv) no other H&S risk mitigations have been tried but one homeless man has been cited as the main reason for security concerns - sufficient to clear all the vegetation and most trees. Lighting, a CCTV camera near the road entrance, a curved convex road mirror at the bend, and a passing space for vehicles part-way, could increase personal safety enough to avoid all the proposed destruction, and may be just as safe, if not more so.

B. The application lacks regard for the natural environment and there are no mitigations proposed for the impacts. The proposals will result in an inevitable and large net loss in biodiversity for the site. There are no attempts to ensure any biodiversity gain.

* All vegetation (apart from some trees) is to be removed completely, without any ecological assessment or mitigation for impacts. This includes levelling the land, use of a herbicide, installation of a weed-proof membrane and a covering of bark chips over all cleared land "to prevent the return of brambles and weeds". There is no intent to bring back any natural habitat or natural planting, and no time-frame to plant anything.

* There will be an unacceptable impact on trees and biodiversity, not just from the removal of trees and habitat, but potential impacts from new lighting. This is the only vegetated wildlife corridor at this location (linking wildlife to other large gardens and areas of wood and grassland) yet there is no ecological assessment; the habitat is dismissed by the applicant as 'scrub and brambles' and saplings.

* The application form states there is no reasonable likelihood of "Designated sites, important habitats or other biodiversity features" being "affected adversely or conserved and enhanced within the application site, or on land adjacent to or near the application site", yet Coombe Wood Golf Course, a Site of Nature Conservation Importance, is very nearby, if not adjacent.

* Likewise the application form states there is no reasonable likelihood of protected and priority species, yet it is clearly located next to a SINC. Bats and other small mammals are likely, as are many birds and potentially reptiles. Larger mammals such as badgers and foxes are also likely to use the corridor of vegetation.

* The application states, incorrectly, that there are no water courses within 20m.

C. Lack of clarity and mitigation in the proposals for trees, path and site habitat-

*The proposed development would result in the loss of most of the trees on the site without mitigation. According to the Council's tree map, there are 5 TPO trees on this site, and others nearby in adjacent properties. This is not mentioned in the application or in any of the design discussions. Any felling of TPOs should require extra justification.

does not show which trees are to be retained or felled, and the fate of the trees is unclear from the rest of the application documents. All that is said is Category B trees will be retained and those removed will be in 'Category C' and all of Group `G16'. However, the fate of individual Category C trees is not declared and Group G16 on the plan drawing is designated as the entire site(!) so this appears to be a licence to remove any tree not indicated specifically in the plan drawing (many). What happens to G8 also remains uncertain.

No TPOs are indicated.

Some clarity is badly needed.

* The application form states there is no reasonable likelihood of adverse impact on designated sites, important habitats or other biodiversity features within or close to the application site, yet Coombe Wood Golf Course, a Site of Nature Conservation Importance, is very close, if not adjacent. Any application neglecting to mention a neighbouring SINC can't be relied upon to assess the site habitat, potential impacts and mitigation, let alone that of any surrounding habitats.

* I am concerned about the indiscriminate and wholesale levelling of the site, removal of native species and the large scale use of herbicides with potential impacts on vegetation or water courses nearby.  The planning statement says vegetation will be cleared, a herbicide applied to the site, followed by a vegetation-proof membrane and bark chips.

Is this really appropriate for a site so close to a SINC and water course?

* The planning statement says "In time (Phase 2) the planting of ornamental bushes and plants will be carried out in this area" so there is no clarity about soft landscaping plans or any time frame, except to remove all natural habitat from the start.

* 20_03258_FUL-ARBORICULTURAL_AND_PLANNING_INTEGRATION_REPORT_26_11_2020-4606441.pdf only shows an "approximate route of path" and states that a structural engineer should be appointed to work in conjunction with the retained arboriculturist to decide the best route.

*it is not clear where the 'up and over' sections of the path are planned, as opposed to the asphalt. Given the path's approximate route impacts on tree RPAs most of the way, this should be indicated. It also affects the viability and sustainability of the scheme given the applicant says that they rely on volunteers to carry out maintenance.

* Why isn't the path made permeable to water? The applicant has chosen asphalt simply for maintenance reasons but there are plenty of alternatives ("The path will be constructed by a excavation of 100mm , a granular base, with a concrete retaining edge and an asphalt surface of 50mm added and rolled. The asphalt surface will ensure low maintenance and allow rainwater to run off into the surrounding cleared area.")

The proposals therefore appear to be at quite an early stage of development and would be better submitted when closer to a more realistic application stage - after an ecological assessment and when the path route is decided. This would have the benefit of certainly about which trees can, or can't be retained.

D. The application lacks regard to the historic environment: the top half of the road and proposed path is in an area of archaeological significance and the course of the old Hampton Court conduit system, which crosses them both. The application makes no mention of this but it should be factored into the planning, with some mitigation, if required. 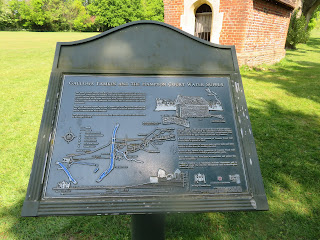 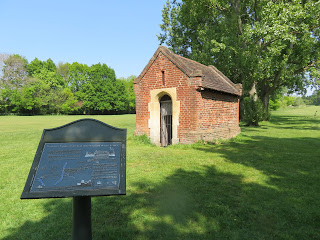