March 03, 2019
Last year I sent a Christmas letter to 48 councillors - asking them to attend to the environmental destruction occurring in the borough - which you can see here biodiversity-air-and-water-letter-to-48. But unauthorised tree felling continued during January, captured so well by several witnesses attending Kingsmeadow in an attempt not only to halt the felling of a row of healthy Monterrey Pines - and other mature trees- but also the tipping of several cubic metres of contaminated soil down the riverbank in order to construct a new discus throwing area, without the necessary planning permission or ecological impact assessment reptiles-in-borough 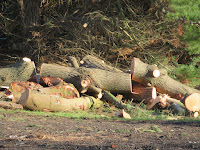 One of the 28 policies in the Kingston Tree Strategy is that 'permission will not be given for healthy trees to be felled'. So I thought it prudent to remind councillors of their biodiversity duty under the Natural Environment and Rural Communities Act, 2006 at the Environment and Sustainable Transport Committee meeting on 12.2.19 webcast available here webcasts

It then  became apparent via the publishing of the Local Implementation Plan and the new Budget, 2019 that the Green Spaces Team were to be 'disappeared'. Including the loss of the tree officer responsible for 12,000 street trees in the borough. I thought perhaps new councillors may have overlooked the fact that along with species extinction, in this age of accelerated changing climatic conditions, there was a suite of new insidious tree diseases one of which - ash die back disease - promises to be as devastating as  Dutch elm disease. So to the full council meeting 26.2.19

Since my deputation at the meeting, I am in receipt of much advice from the annals of the council, but in particular, that the loss of the Green Spaces capacity is entirely in line with the dystopian Direction of Travel document that requires the borough to provide 30,000 new homes (with additional numbers predicated on Crossrail 2).

As we have seen from the Issues and Options review some of these will be built on our Green Spaces so presumably we won't need a tree officer or a Green Spaces Team opportunity-areas-whose-opportunity  and for anyone who says 'we need more homes in Kingston' - our land is marketed abroad - see Queenshurst Singapore, Malaysia or Vietnam http://www.cbrevietnam.com/Vietnam-Property/queenshurst.cbre

Kingston has truly entered the Anthropocene.