Kingston Council has commissioned Land Use Consultants (LUC) to undertake an independent review of the borough’s Sites of Importance for Nature Conservation (SINCs).

SINCs are non-statutory sites that are designated due to their importance for nature conservation. A number of wildlife areas across Kingston are already recognised as SINCs as they form vital components of the ecological network and green corridor in the borough.

The council attest that, 'A SINC designation raises awareness of a site’s importance for wildlife and biodiversity, particularly with regards to planning and land management decisions, and helps ensure they are afforded adequate protection by the planning system in London'. But will our degraded sites  pass this 'test' as the designation hasn't stopped sites from being destroyed or developed for infrastructure.

The Pipe track has undergone a transformation with two layers of fencing either side of a massive amount of tarmac cycle path and walkway. It has street lighting columns that would illuminate any urban residential road and lots of non-native species have been planted including: Goat's Rue Category 4 on the London invasive species list non-native rye grass with the botanical interest of a rugby pitch, despite promises of wetland habitats, bat 'nests' bird boxes etc. Mini Holland consultation 2015


The Pipe Track does give us:
But  is it still a wildlife corridor and what of  the SINC status?

To its credit the council did have  an independent review undertaken by a consultancy who expressed concern about the loss of designated site habitats. They suggested 'an appropriate habitat creation scheme and long-term management plan are required to compensate for long-term loss of habitat within the SINC'. aiming to to 'improve the structural and species diversity of the habitat mosaic, including through recreating and increasing the quantity, diversity and connectivity of the grassland; and to maintain and improve habitat connectivity along the corridor including of the hedgerow/scrub/trees'. 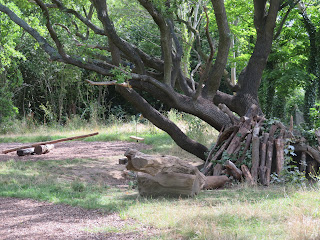 To that end some of us put in a lot of time to recommend that the fences be established at a  sufficient height from the ground to allow animal passage, the level of lighting should be reduced as it could never be justified to retain the bat interest including the brown long-eared bat that was recorded during the design phase (Graves 2015)  and there were agreements over better protection of a woodland area but it wasn't this:
Now you can see Italian rye grass, garden verbenas, goat's rue Cat 4 London invasive species list, a woodland with swings and a see saw and ..... 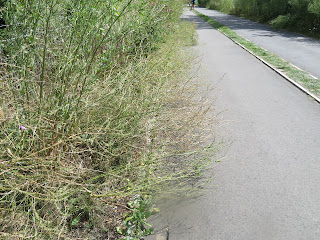 an over-abundance of hoary mustard, first recorded in the wild in 1837 (originally from the Mediterranean) but in recent years it has been spreading from its heartland in London, and can now be found around the Severn Estuary, in East Anglia and in north west of England. The word ‘hoary’ probably refers to the grey-green colour of the foliage – this property is also picked up in the species name, ‘incana’, which is the Latin word for ‘grey’. In Australia, it’s considered to be a noxious weed, and given its prevalence in London may soon appear on the INNS list.The plant is occasionally the larval foodplant of the Orange-tip Butterfly, who generally prefers to lay eggs on Garlic Mustard. 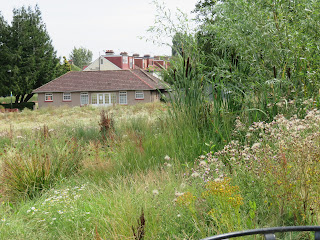 Bat surveys
Consultants contracted by the council to undertake a survey prior to works (2015) found that bats were distributed throughout the Pipe Track, They even recorded Brown long-eared bat, which is an unusual record for an urban area.

....'the pipe track section of the route had a consistent level of activity for
common pipistrelle along its length and occasional other species which was higher than
would normally be associated with non-riparian routes. The habitats along the pipe
track are currently beneficial to bats and its current dark condition contrasts with the
surrounding sub-urban area'.

We have undertaken 2 surveys from Raynes Park to New Malden 28.7.20 and New Malden to Raynes Park 2.8.20 using the same methodology and we have not found bat using the lit section from the Alric Avenue ramp to the New Malden entrance.

Plot explanation: we undertook the New Malden to Raynes park pipe track bat survey in reverse 2.8.20; starting at the NM end. The result: the same as before no bat activity west of the Alric Avenue ramp; bat only on the unlit eastern side.
Goat's rue London Invasive Species Initiative New Malden Pipe Track SINC Grade 1 site of borough importance for nature conservation