Manor Park is an unusual site as it is grazed by the rabbits that live along the railway line. This gives rise to floristic interest and the LWT grassland survey (2006) found: Cuckoo Flower, Meadow Vetching, Ladies Bedstraw, Common Knapweed, Bulbous Buttercup, Germander Speedwell, Common Vetch and Bird’s Foot Trefoil. A range of grasses and rushes are present such as Annual Meadow Grass, Common Bent, Gallingale, Hard Rush and Meadow Foxtail. It is an important site for amphibians and 2015 was an exceptional year for frog spawn (particularly after volunteers had undertaken so much work). This winter it is looking as if it could benefit from some tender care  as the site is looking 'seedy'. 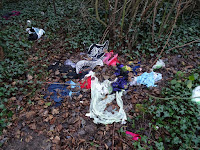 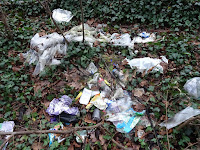 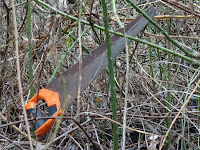 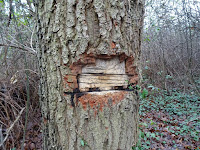 So much litter has been deposited in the areas of woodland. These are from several sources, including the  discarded refreshments from footballers and spectators; as well as the sources described in the previous post. It is well known that litter breeds litter.

Many trees have been felled and some damaged including this mature oak which carries scars from  the well known game 'lets do saw practice'. An adjacent area clear felled of trees is still hoarded and no re-planting has been undertaken by the owner.