The review of Sites of Importance for Nature Conservation (SINC) 2020 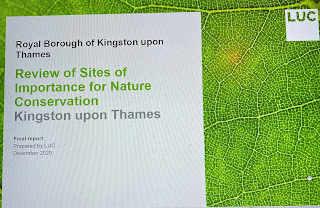 The SINC review has at last been released for public consumption and the results do not make for enjoyable reading. Four large  sites are 'at risk' of de-listing and all bar one are council owned.

The site that is privately owned - Seething Wells - has been defended from development by the council at no less than three public inquiries - on account of it being Metropolitan Open Land - but the council have not defended its descent into a poisonous desert.The Review states that there are 'anecdotal records of Himalayan balsam at the site'. This appears to be hearsay as it is not on the list of plants held by the London Biological Records Centre (GIGL). Unfotunately it is the reason that the Environment Agency issued a permit to spray glyphosate at the site without any evidence of it existing.

The Review also fails to mention Crassula helmsi- a notifiable weed- at the ponds at Alexandra Milenium Green and Jubilee meadows.

So there are important  species that  have been misidentified or omitted altogether. This is a shame as the survey is enormously expensive and previous reviews (2006) have been a valuable source of 1,000's of records, heavily relied upon by all who undertake projects and surveys in the borough.

The review data should be submitted to the London Biological Records Centre (GiGL) and then sent to multiple organisations in data searches (including the council as part of  its Service Level Agreement). Future searches may yield unreliable biological data if these records are not properly validated.

The SINC review misidentifies certain key species; according to the surveyors Kingston Cemetery has a good number of Rooks -although it doesn't give their status- July records would normally be breeding records- a Rookery perhaps (page 73 of the SINC report).

According to W.H. Hudson writing in 1898, there was once a rookery at Norbiton Church. But in the more recent past, rooks have  not been recorded  around  Kingston.

Rooks are a bird of farmland generally not found much further north than Guildford in Surrey. The Surbiton and District Birdwatching Society report (2018) states that Rooks are a 'rare visitor'; three flew over Berrylands and were the only sightings that year (9.3.18). The London Bird Report states that the vice county (Surrey in London) there was one sighting of a rook at Cannons Farm (January 2018).

So I have written this letter to councillors:

I find the FOUR sites appearing in the recent SINC review ‘at risk’ of de-listing -on this councils watch – to be an embarrassment of Metropolitan proportions. Three of the sites are owned by the borough, cover large areas and host a reasonable number of protected/priority species. The sites have been experiencing issues in recent years, which have been reported, but nothing has been done to abate their degradation.

The sites are currently of borough importance i.e.: Coombe Wood GC; Jubilee Meadows; and the Leyfield. Additionally, the Riverhill Kart track, recommended for delisting from the Riverhill SINC, blights not only the SINC, but adjacent SINCs with its light spillage and other pollutants. This could be mitigated with better land management elsewhere at the site. There is enormous room for improvement and perhaps some remediation of the on-site Tolworth ‘Apple Store’ (the barn) with a new roof and incorporated bat loft could be one solution.

New designations or ‘proposal sites’, offer little consolation and will do nothing to stem the biodiversity loss in the borough. These are generally small extensions to existing sites or community gardens of local interest. This is true of Alexandra Millennium Green - the subject of extensive correspondence from the Invasive Species Officer of South East Rivers Trust- regarding the Australian swamp stonecrop Crassula helmsi in the pond.

C. helmsi is a notifiable weed Schedule 9 of the Wildlife and Countryside Act 1981, is on the London Invasive Species List, and capable of causing infection which could cause great damage to the ailing Fishponds nearby. It would only require a dog swimming in one pond to carry it to another for the stonecrop to take root and proliferate. This notifiable weed and was not identified in the current SINC survey 2020 (Crassula is also present at Jubilee Meadow ponds).

The remediation proposed in the SINC report is rather simplistic and a more comprehensive approach would be required to combat the multiple assaults (particularly from offsite developments). As buffer zones and wildlife corridors are removed for infrastructure, surveys should automatically be required near SINC boundaries, without having to be requested by members of the public. Management Plans might be a solution. The council has not normally produced these for sites in a comprehensive way.

In every planning application that comes before the council, planning law obligates a biodiversity net gain. The new Environment Bill will mandate this to 10%. This could not be incorporated on many Kingston development sites, as they have a tendency to ‘Total Footprint Developments’. Gain proposed in the eco-reports are rarely executed anyway, as the New Malden to Raynes Park Pipe Track and Tolworth Court Girls School applications demonstrate.

Putting the Leyfield forwards as a candidate-site suitable for biodiversity offsetting could assist in its remediation, and might be one way of cleaning up the fly-tipping and invasive species. I have put this letter and further comments on my blog as a record of this sad time for biodiversity.