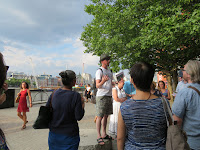 The last time I encountered Tom Bolton was at his talk to the Friends of Belair Park in 2014 see: londons-lost-rivers-talk-by-tom-bolton.html Last night Tom, in collaboration with  'The Museum of Walking' and during the mayor supported 'National Park City week',  prelambulated us along the hidden course of the Neckinger. The starting point was a very parched Bernie Spain gardens, from where we headed towards the grounds of the Imperial War Museum. 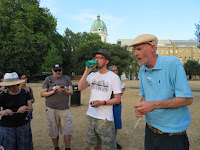 The watercourse drained the seasonally wet (and occasionally flooded) ground at St George's Fields, now Geraldine Mary Harmsworth Park. Here, while Tom topped up on his fluids Andrew efishently demonstrated the technique of employing dowsing rods and that - whenever the rods crossed - we could be certain that we were walking above the water course (now flowing through the complex of Thames Water's sewage pipes). Brook Drive near the rear of the IWM is thought to be the source of the Neckinger. 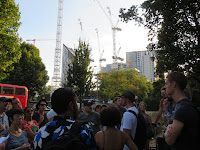 From Brook Drive, the Neckinger  flowed through the Elephant and Castle, past the site of the Lock Hospital Kent Road, which used to treat sexually transmitted diseases. Currently it is the 'city of cranes' - the former Heygate estate - now known as Elephant Park, but perhaps should have been Eel Park. Historian Walter Besant - biographer of our own flaneur de Hogsmill, Richard Jefferies, said the Neckinger's early section, where it crosses the Kent Road, at Lock Bridge, was also known as Canute's Trench...... 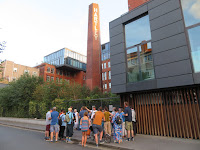 ......and onto the Hartley jam factory- to admire it - rather than to ascertain its riverine relationship.The factory was built in 1901 by Hartley’s Jam and, with this increased production facility, the company became the largest selling brand of jams within the UK; although internationally John Austin's Jam Factory (here in Kingston upon Thames) held other companies - such as Heinz - at bay. Their holding of the royal seal of approval kept Heinz from even attempting jam production for a few years. 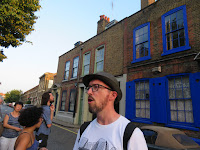 To Bermonsey -the 'ey' means 'island' and the oldest buildings of London, belonging to Bermonsey abbey, which was  connected to the river by tide mills. These  'efishently' generated power on the ebb and flow tides, after the monks enlarged and embanked the Neckinger inlet. They named the dock after the abbey's patron, and ran a windmill on its bank, the Mill of St Saviour. Around 1536 (and the dissolution of the monasteries) the windmill was converted into a water mill to supply local inhabitants with water. 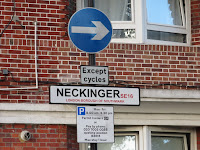 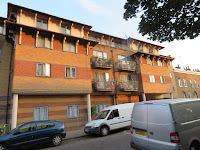 It later became the first water powered gunpowder factory - rebuilt as a paper mill - making paper from straw. By Dickens' time, lead mills occupied the site. The Neckinger estate and the Arts and Craft influence in the area from the William Morris afishionados attracted to the area. 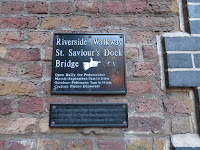 The river provided a water supply for tanneries as this was one of the main places in England for the manufacture of leather. Factories and mills were  developed, some of which are still evident. Soil excavated from the ditches was used to embank and raise the level of the adjacent ground to provide  dry foundations from extensive marshland known as 'unsavoury dock'. The whole network of watercourses acted as an extended mill pond. 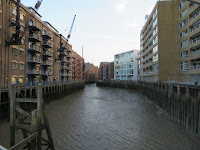 Here the inlet divides the riverside districts of Shad Thames and James' Island. It has since been joined by new blocks of luxury flats, which coexist, with some friction, with the attractive  houseboats - moored offshore at Reed Wharf. The Thames Path has also been 'privatised' and the access gate to the National Trail is locked at 23.00 hours. 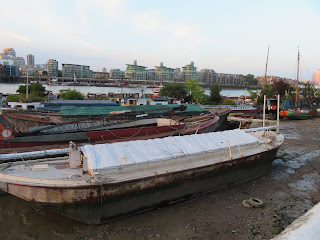