July 18, 2018
At the indoor meeting of Surbiton and District Birdwatching Society, members shared their best birding moments in written form or screen presentation. Thinking it was about time I did a bird post - having recently  covered everything from glow worms to fish, I asked Simon if he would mind being my guest-blogger, as his writing was so evocative, I was transported straight to the coast, almost watching the same birds.

I used to go to Langstone with my late uncle - we were both members of the Hampshire Ornithological Society- who were lucky to have Chris Packham as their President. Chris is doing a 'Walk for Wildlife' 22.9.18 look out for the publicity, I hope you will all go.

I like Simon's writing because he delights in everything from geese to gulls, not just the rarer species; he has the same conversations with himself as we had, when trying to identify waders. If you like his account then read J.A Bakers account of the Peregrine; see what you think.

'High pressure had returned and the sun shone through the trees on the way past Liphook and Liss. On the narrow path from Bedhampton station a robin-sized bird flew into the top of a bush or small tree behind me. It had a pretty light to medium-brown rather autumnal-coloured breast, not streaked, a darker head and a particularly large eye for it's size. From its perch it was constantly looking about, so that its head was never still-a spotted flycatcher, which then flew off out of sight. 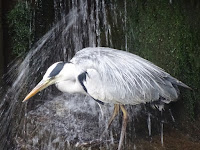 On the pond by the old Mill House were some gadwall and coots and a heron which soon left, while a little grebe dived on a smaller piece of water the other side. Coming to the mouth of Hermitage creek, I could see a line of oyster catchers and plenty of gulls, herring and black-headed. Beyond in the open water eight Brent geese swam past. It was two hours after high tide.

Birds were beginning to gather on the shoreline as I walked along the sea wall and I decided to stop at the seat overlooking the shore for lunch. Oyster catchers, and redshanks were the most numerous. Flocks kept coming and soon there was a contingent of dunlins and a crowd of curlews and a small group of grey plovers. Eventually I spotted some godwits , but they exhibited sighs of both varieties (and may have been both) and I couldn't make up my mind.

After lunch I went out to the point at New Milton. The sun shone over Portsmouth from a largely clear sky, but the clouds were gathering to the east all afternoon. A kestrel started hovering over Farlington Marshes and almost immediately made a fast dive and came back up with its prey. There was a pair of stonechats in the bushes along the edge and shovelers and teal on the pools, with a single shelduck not yet in full plumage. On the point several curlews were feeding and calling on the broad mud banks. The tide appeared to be fully out.

The walk back was a birdwatcher's dream, just one thing after another. A swallow came past flying north and then another until by the time one passed in front of me low over the path I had decided that it was the same one circling over the marsh.The kestrel reappeared and a flurry down towards the water - or where it would have been - drew my attention to three meadow pipits clinging to the side of the wall and then dropping onto some sea weed. one bird left the group and flew to the right, with an obvious white rump below a pattern of some kind - a wheatear.

I passed the stonechats again , and further along the same line of bushes was a flock of goldfinches, shining brilliantly in the lowish sunlight. Finally  the thick bushes along the cycle track was a flock of long-tailed tits. By the time I reached Broadmarsh  the tide seemed to be coming in again, and the birds were along the shoreline as before. The godwits were still there and I sat down to study them. Some of the flew to different positions and I could see no wing bar - suggesting bar-tailed- but try as I might I could see  no white diamond either.


Eventually there was a view of just one on the other side of the creek mouth. No wing or black markings were visible but the length of the bill and the legs made for a definite black - tailed species. I made for the 17.37 train back and it soon grew cold and dark.'