Tolworth Treasure and the Hogsmill Hum Walk 2: The Edgelands

The second  walk in the series presented by myself and walking artist Lucy Furlong, was designed to
highlight features in the Tolworth Edgelands and it's environs. The edgelands are a window through social and cultural history; as well as being a reservoir for the shyer species of animals and birds, such as badger, deer, kestrels and buzzards etc. Tolworth was an inspiration to the nature writer - Richard Jefferies (see previous post), and we followed in his footsteps, as well as navigating the informal pathways and desire lines made by  animals, birds, and people.

Tithe maps and the tithe apportionment are sound  documents for historical research regarding past land use; as well as dissertations available in the Local History Room (at the back of the Guildhall); one comprises a series of interviews with staff that lived and worked in the Worcester Park. This included the silk printing mill whose remnants exist at the Bristows haulage yard and until 2017, the mill wheel lay in the garden at Mill House (demolished earlier this year). When they had sufficient orders, the printworks at Merton Abbey Mills subcontracted  Henry Wilkes of Worcester Park to print Liberty patterns. This was abandoned at the outbreak of WW2 as the product was seen as a luxury.


Worcester Park House - was located behind the Toby pub in Cromwell Road in the photo - was made uninhabitable by an oil bomb in 1941. This entire area was once  the  edge of the Great Park of Nonsuch - the royal hunting grounds. In 'Places and Buildings by H.V. Molesworth Roberts 1970, it is asserted that Dancer Dick wood along the Salisbury road is a relic of the Great Park of Nonsuch. This woodland copse owned by Epsom and Ewell council is partially responsible for the strong woodland bird community in the district, which includes nesting nuthatches, tree creepers and woodpeckers; there is also a woodland designated a Site of Nature Conservation Importance at Riverhill north-west of the Hogsmill.

As we followed the London Loop along the west bank of the Hogsmill we discussed how Surbiton Raceway http://www.surbitontown.info/ ; the pylons that run to the southern tip of the borough;  and the way the land is drained; conspire together to maintain an informal land use which gives both seclusion and permeability for wildlife. Here we saw thrushes on the open land: mistle, redwing, fieldfare and songthrush and a kingfisher took off noisily along the river as we approached the A240 bridge. 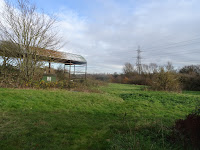 In the  edgelands  can be found remnants of hedgerows planted under the Enclosure Acts, which came relatively late to Tolworth (1820). They contain a lot of English elm and are located near the entrance to Tolworth Court Farm Moated Manor site, which was first recorded as a manor house, chapel, bakehouse and brew house in 1327. Here we saw a green woodpecker at the yellow meadow ant mounds, kestrels in the barn, buzzards along the tree tops and herons standing alongside the pond, which was once part of a four - sided moat.


We shared our knowledge of the local history and wildlife: Elizabeth showed us the ganoderma at the base of this old boundary oak tree and Pam found a brown hairstreak egg on the new blackthorn growth, which we viewed with the aid of a hand lens. 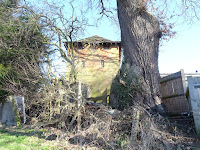 No visit was complete without a homage to the Apple Store alongside the boundary oaks. We convened at Court Farm Garden Centre Cafe where the tables had been laid out for us by staff and we invited people to contribute recollections to the Memory Tree that has been erected for the purpose of capturing local stories. We heard from participants about picking apples on the local estates and the Italian prisoners of war that worked in the fields of Chessington and of course, Tolworth Court Farm which will be the subject of a later excursion.

Many  features we saw as we became 'edge navigators' were absent from the consultation documents of the Tolworth Area Plan (held last year at the library). If we cannot get them recognised they will be swept away in the new rounds of development. Across the country there are major changes to edgelands. Councils are under pressure for example to create cycle paths for better air quality. Paul Fairley, in his home of  Bilston, nr. Harrowgate in his book 'Edgelands' - as well as other authors - note the changes to our informal countryside. Tolworth's edgelands are losing their fluidity and responsiveness to the needs of the communities they serve, as exemplified in the new hotel and other developments planned along the A240/Jubilee Way.

Thank you to staff who allowed us to convene on the grass outside the pub prior to the start of the walk and Court Farm Garden Centre for hosting the memory tree and the lovely reception after the walk. All of the locations mentioned - except for the public path along the Hogsmill known as the London Loop - were accessed by  prior arrangement and written permission. Please ask before reprinting as the material may be copyright.
brown hairstreak butterfly buzzard Dancer Dick Wood Edgelands Great Park of Nonsuch kestrel Kingfisher Richard Jefferies Toby Carvery Tolworth apple store Tolworth Court Moated Manor Tolworth Treasure