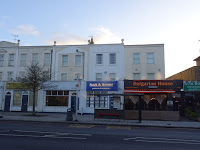 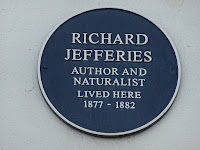 Jefferies' biographical sources (Thomas, Besant and Looker) - agree that his years in Tolworth were his most creative - those between 1877-1882.  He lived at number 2 Woodside (now 296 Ewell Road and an estate agents) for which he typically paid around £28 annual rent.

It was described as abutting a copse in 'Round About a London Copse'. Despite his daily walks around Tolworth (up to ten miles per day) his initial focus remained on the Wiltshire agricultural landscape, which he had recently left. The 'Future of Dairy', for the Livestock Almanac was his last essay on agriculture. Jefferies was encouraged by his publishers to write about his observations in the north Surrey landscape, as there was a market for this information amongst the suburban commuters.


In  'The Crows', published in The Standard November 1880, he wrote,' the numerous pieces of waste ground, to let on building lease, the excavated ground where rubbish heaps can be thrown, the refuse and the heaps, these are the haunts of the London crow. He wrote in his diary that he heard a cuckoo in the copse; although the march of bricks and mortar continued and St Marks school (as it was then) was built opposite Woodside.

Thomas observes that his subsequent writing became introspective and led to greater self-examination leading to an autobiographical book 'The Story of My Heart'. Jefferies was probably suffering the effects of tuberculosis and took several protracted seaside holidays. Jefferies lung conditions required surgery and he had four operations in 1881. The following year he decided to move to Brighton.

His death was noted as phthsis, a lung disease resulting from continuous bad environmental conditions. During those years the District Improvement Commission noted there was a 50% increase in deaths from  this lung condition between 1877-87 (despite much less typhoid and cholera).

In 1941 a bomb destroyed the villas except 294 and 296 but they were later rebuilt and more recently  a blue plaque has been erected.

Richard Jefferies The Crows The Story of My Heart Tolworth