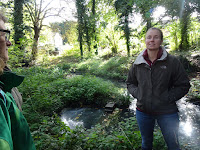 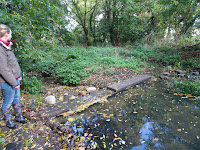 Following the London Urban Water Management Conference, Thames21 and Enfield Council  organised a tour of the Rainscapes last Tuesday. It was great to see the sites in the raw as well as talk to members of the local Friends groups.

Our first stop was at Lonsdale Road and Aimee Felus from Thames 21 and Ian Russel the borough engineer at Enfield council showed us some of the impressive schemes they had colaborated on, that were custom designed to prevent polluted storm water run-off from entering the streams. This included deculverting part of the hidden Glenbrook river along a woodlot .


Misconnections from sources of sewage entered the river through various outfalls but are hidden under the road. Here they are seen and can be dealt with and the process starts with a boom to hold back the worst excesses of pollutants, most recently this has been cement washed into drains from building works which has left an amount of white deposit. The water enters a network of cells where the reeds and other water plants strip out 28% of the phosphates and 68% of the nitrates. Road run-off enters the system via swells as the drains have been blocked around the site and the pipes removed, reducing maintenance. The water is pushed around a total of six cleansing cells or basins. Bacteria in the soil break down some of the coliforms present.  Healthy plant growth is essential for this to work successfully and the water to be properly purified. This may mean that tree work must be undertaken which can be unpopular with the local community. However as local residents have been familiarised with the project they now actively join management tasks and are proud of this initiative.

Most people will never know they are walking over one of London's lost rivers and so the project will install interpretation at some point, over the hidden watercourse. There are badges on some of the drain covers stating that the pipe leads directly to a river. The water in the different cells is continuously surveyed and it can be demonstrated that the water quality that leaves cell 6 to enter the stream is of a higher quality than that entering the system at cell 1. 16 gullies were blocked off and diverted through 'swales'.


Elsewhere swales have been created along grass verges to prevent excessive amounts of untreated run-off entering the stream. Gullies are capped (left) along Howsden Road. Reeds are planted in the excavated meandering swales. All verges could be rain gardens. 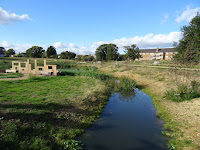 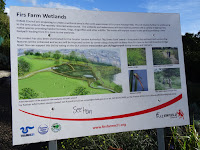 The main driver for Firs Farm Wetlands, was to reduce floodrisk. The former culverted Moor stream-a tributary of the Pymmes brook- suffered a number of misconnections, which hid sewage until it entered the Pymmes. By creating extensive wetlands and reed beds these can be cleansed (although tests show that the levels of ammonia and nitrates is still high).


This is Bury Lodge Park a former council depot and site of the new Enfield 'Mini-Holland' cycle route or quietway. The opportunity has been used to continue the SUDs project diverting the run-off from the main road to a series of wetlands. The lighting here will be infra-red so will only be activated when needed.

This is the Alma road raingarden and interpretive mural to enliven the subway wall. This is an area prone to flooding and chosen as suitable for SUDs. In this example the gullies have been blocked and water is diverted into these newly created flower beds. It can be unpopular where it prevents roadside parking and some community benefit should be derived such as street art, which also serves to inform the public about the benefits of these projects.

Upstream art https://nwaupstreamart.com/  Is an educational program utilising art to communicate the function and importance of storm drains. UpStream Art gives artists the opportunity to express themselves with semi-permanent public art in the form of a small-scale outdoor storm drain mural. The purpose of UpStream Art is to 'draw attention to the usually discreet concrete and iron infrastructure with the hope that observers stop and think about where the water flows after it enters a storm drain. If residents understand that stormwater flows untreated to creeks, streams, rivers and lakes, then they will be more conscious of potential pollutants that can enter those waterways. This project, along with the involvement of a vibrant art community, is unique and has a positive impact on water quality protection'.