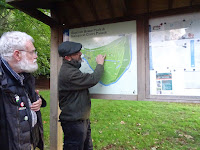 Members of the Richmond Biodiversity Partnership enjoyed a walkover of the paddocks at Hampton Court Park (aka Home Park) to see the newly created wetland habitats- including  sluices to aid control of the Longford River-  installed over the last two years.


Part of good stewardship of the wildlife in this  oasis- is the control of mink -which are prevalent in this catchment, particularly from the river Mole and our stretch of  the Thames. They have caused havoc with local water vole populations.

The  skins emphasised the size difference between  the male and female, with the latter able to gain access to a water vole burrow.The wildlife officer demonstrated the use of the mink rafts, which are in use at many wetland sites in  south-west London.


This one is missing the roof to demonstrate the wet clay, which serves to reveal footprints of the visiting animals, to warn of the possible presence of mink.

We were told that the rafts are no longer baited with food as they became a magnet for rats, but instead a gland is obtained from America, which once attracted a mink within 20 minutes of being employed.

We were shown the sand martin bank-these are also successfully attracting this declining migrant across south-west London at the London Wetlands Centre and Eel Pie Island.