October 16, 2016
On Friday team members from Natural England and DEFRA,  from  the south-east and London regions, descended on Tolworth Court Farm Moated Manor on an awayday; to assist us with the ongoing management of the site. Elliot gave a tool talk, prior to participants extending the dead hedge along the boundary with the Hogsmill footpath. Materials were procured from a local woodsman who delivered to us before the day began. 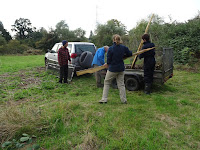 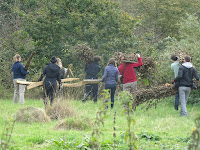 Hazel faggots  and stakes were unloaded and taken to an area under where the previous group - a Duke of Edingburgh award scheme- had finished. By the end of the day our compost toilet had a coat of protective paint and the hedge had increased substantially in length.

Participants were surprised at the amount of bird life present as we watched jays,  woodpeckers and kestrels; as well as a number of small birds such as goldfinches.