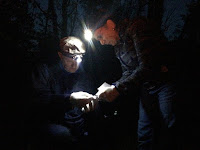 Last night's harp trapping at Jubilee Wood was the final session until the end of July. This is to avoid the bat birthing period. We caught 6 bats in the first part of the evening -until 00.17- when the last bat  turned up on the string-pole rather than the catch-bag!


When weighed it was obviously larger than the four soprano pipistrelles that had formed the bulk of our evenings catch up until that point. Although the -fifth  finger measurement divided into the  forearm length- did not produce the 1.25 ratio required to confirm the identification of a Nathusius pipistrelle; the split cell veination on the wings, rough mane around the neck, larger size as well as their propensity to 'play dead' was sufficient to validate the species ID. Just in case a dropping was taken for DNA purposes.

The most exciting catch of the evening was a Whiskered/ Brandts bat. The only other record for this species in the borough was the prolonged surveys undertaken at Seething Wells during 2011. Trapping will resume at the end of July, when the young will be on the wing.
Harp trapping Jubilee Wood nathusius pipistrelle soprano pipistrelle whiskered/Brandts bat