May 02, 2016
The eel trap was reinstalled by Joe (20.4.16) so we could monitor this years eel passage. The first eel of the season was found on the second check of the year and today (29/04/16), 3 eels were found.
The eels  are transferred to a bucket where they are measured before they are carefully returned to the river. Most of today's catch were of a similar age class, but a much larger eel was seen further upstream (near the cemetery) later that day. 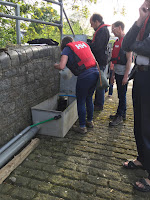 Look out for eel traps along other rivers such as this one at Teddington Lock!

Some not so good news with the river monitoring (see March, 2015 posts) : three out of the four RMI monthly checks have found breaches in trigger levels – meaning that recent pollution incidents have affected this stretch of the river, compared to last year, when none of the RMI checks resulted in a breach.

Pollution events are complex and range from misconnected  sewage pipes and  washing machines  from private households; to large scale releases of sewage (see post of 19.4.16). During April diesel spilled into the Hogsmill for four days - from an outfall in Tolworth - although the source could not be located.

Dead fish are also a sign of pollutants in the water course. A dead barbel was found by the Guildhall after a major sewage spill (8.2.16) - see February post. The spill deposited a lot of  'rag' along the waterway, which we attempted to clean up last Friday.

Removing 'rag' from the channel is a major undertaking and can disturb nesting birds at this time of year. However some removal is a useful way of monitoring fresh spills; as well as improving the environment.

It is amazing how nature fights back and 2016 is going to be a good year for water starwort (below) a plant that has obviously benefitted from the in-channel improvements undertaken over the last two years.