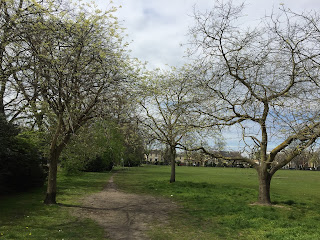 Some of the borough's trees  have been planted to recognise an event or passing of  a loved one. The three on the left, were planted by former Cllr., Julie Reay (and others) to commemorate the laundresses who worked in the Kingston laundries.

The Surrey Comet 15.6.1872 stated that 'there was an open air demonstration of washerwomen on the Fairfield'. The women, known as tub-thumpers- earned an average of 2s 6d per day plus a free pint of beer for working an 11hour day. They worked calf deep in water and suffered many ailments, such as trench foot.

In 1872 a number of laundresses went on strike and this has been documented in 'A dramatic account of the Kingston, Surbiton and Norbiton Washerwomen's strike of 1872' edited by John Pink of Grove Lane. In 1922 they attempted to unionise and rallies were held also on the Fairfield, leading to a number of arrests.


When the laundry in Bonner Hill Road closed it was not for want of orders: the Hilton, Sheraton and other hotel chains sent much of their laundry to be washed by sixty staff members, many who lived on the Cambridge Road Estate; Tony Blair, Margaret Thatcher and Gordon Brown sent twice weekly washing baskets; and the starch tub (left) was one of  a few in the country; the women who undertook the starching of barristers collars - sent all over the world- were in their eighties.

The stable block (now converted to housing see photo above) sheltered the horses that transported the laundry to Kingston Hill residents, including John Galsworthy. When the horses were no longer required for delivery the block was converted to a dry cleaning area, which I used more than twenty years ago.
commemorative trees John Galsworthy Julie Reay Laundry stable block.