The scene from Beverley Park 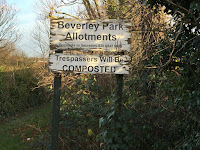 Two areas of green space along the eastern borough boundary and abutting the Beverley Brook are: Beverley Park; and the Beverley Park allotments.  The park has a friends group, which meets every Thursday morning (according to a notice on the fence).

Beverley Brook is a SINC or a Site of Importance for Nature Conservation  in Merton,  site reference MeBII05. See the separate post on the left hand menu with further information about the brook.  Some habitat creation can be found along the boundaries especially with the railway lines.  There is scope for further habitat creation and the adjacent  ‘Old Emmanuel (Blagdon Road) Sports Ground’ has been deemed suitable to ‘create new/restore relict flood plain’. Stands of Japanese knotweed were noted on both sides of the river, including some encroachment into the Park. This will need specialist attention to prevent spreading to other areas. 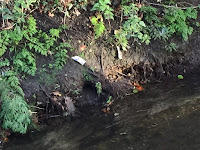 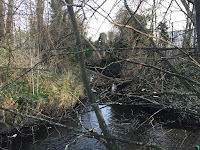 Our visit found evidence of badgers using the pathway along the brook.There are   occasional fresh holes along the waterline, although there was no evidence of grazed bankside vegetation. A bifurcation of the Beverley, the Pyl brook, runs perpendicular to the park and can be seen in the photo. 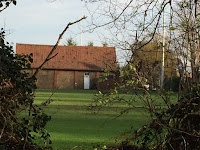 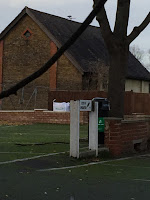 Looking east, lies a single storey barn on the Blagdon Road Sports Ground. It is brick built with a clay tiled roof and timber eaves and a vaulted ceiling. There are numerous gaps between tiles and around the eaves through with bats could access the barn or roost. Internally the roof is lined and modern timber beams are present. A limited survey during 2014 found four species of bat using the area and I used to survey the Pyl brook for the National Bat Monitoring Programe several years ago. I hope the barn has been given some local listing by now as there were plans to pull it down before many of us realised it even existed!