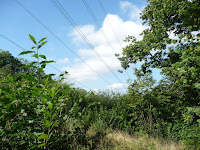 Sixty Acre wood formed part of the Barwell Court estate up until earlier this year. This majestic ancient woodland, borders Fairoak Lane in Chessington. The initial woodland compartment west of the National Grid Sub-station is known as Jubilee Wood (this should not to be confused with the council owned Nature Reserve, of the same name, which is east of the sub-station).  A National Grid wayleave is present throughout these  woodlands and managed by UK Power. The wayleaves are coppiced on a 3-5 year rotation offering a rich habitat mosaic and are important for viviparous lizards.

The woodland  slopes down a steep gradient towards plantation woodland at its western extent (at the Surrey county boundary along the A3). It is predominantely hazel and sweet chestnut coppice, managed in traditional ways.  A woodsman operates near the CWoA overflow car park and cuts hazel faggots and operates a charcoal burner.

Sixty Acre wood offers the most well developed woodland floor of any woodland in the borough and has been given a metropolitan designation in recognition of this by the former London Ecology Unit. There are many plants of ancient woodland including the  indicator species Wood Spurge, Barren Strawberry, Yellow Pimpernel, Wood Sorrel and Wood Anenome. Early Purple Orchid, Common Spotted Orchid and Marsh Orchid are the specialties at this site. It is one of the few places in the borough where Bullfinches remain along with many woodland bird species.

Unfortunately the woodland is about to drastically change as highlighted by the London Wildlife Trust in their 'Save Sixty Acre Wood' campaign. Chessington World of Adventures are proposing to install high ropes and climbing equipment across 2.4ha of this woodland (almost six acres), along with new path networks and associated maintenance and access routes.

London Wildlife Trust recognises that high ropes adventure courses are in high demand (several more are proposed in other parts of London), but they believe that this is a highly inappropriate location for such a facility and do not believe the benefits outweigh the impacts to the woodland, which is effectively an irreplaceable habitat.
The planning application can be viewed here