November 07, 2015
There are several posts on Tolworth Court Farm Fields (Local Nature Reserve), but until now a portion of the site known as Tolworth Court Moated Manor (TCMM) across the busy A240 has only been mentioned in passing.The south west boundary of TCMM is Kingston Road (A240) and the south eastern boundary is the fence-line running along the River Hogsmill. Old Kingston Road forms the north west boundary and Kingston University playing fields border the site to the north east. The site is roughly square with an area of approximately 2.7ha. The moated island on which the manor complex would have stood is on the very edge of the site to the south. The north and east arms of the moat are still in evidence, the latter having been excavated and is managed as a pond.

A barn, near the gated entrance, has a relatively new roof but no walls and has a Barn Owl box installed by Lower Mole Project. The boundaries are largely fenced with earth bunds along Kingston and Old Kingston roads installed by RBK in 1992 to prevent incursions by Travelers.These bunds are   preventing proper site management and the site is not achieving its potential: the pond is silted up and few amphibians are associated with it and the grassland is ironically enriched from these excavations and therefore dominated by bramble, hemlock and nettles. However it contains some of the best yellow meadow ant mounds in the borough.


OUTCOME OF SITE EXCAVATIONS
The trenches dug in 2000 by Surrey Archaeological Society in which I participated, sought to explore a number of the earthwork features identified in a 1994  survey. Excavations found no structural evidence of the medieval manorial buildings.  Post holes, pottery dating from the  Iron Age and Romano-British periods, as well as butchered animal bones, were found in this trench, and in an adjacent ones. These finds suggest that the area was a site of animal husbandry, and was possibly divided into a series of fields or compounds during the Late Iron Age and Romano-British periods. The discovery of Anglo-Saxon pottery was particularly interesting as evidence of settlement in this period has not previously been found in the area. I therefore made an application to schedule the site as an Ancient Monument in 2012.

ENGLISH HERITAGE
In order for a site to be considered for scheduling, it must be possible to archaeologically understand the type of site and to define its geographical extent. Tolworth Court Farm is known to have a long history of occupation dating back to the late Iron Age. However, at present, understanding of the pattern of pre-medieval occupation is little understood, and it is not possible to define the nature of the site, or its extent. English Heritage deemed that: 'Substantial documentary evidence,  shows Tolworth Court to be the site of a moated medieval manor. Such sites form a significant class of medieval monument and are important for the understanding of the distribution of wealth and status in the countryside. For this reason, where they survive well, they will be serious candidates for scheduling. A considerable number of moated medieval sites are known in England, they were built throughout the medieval period and are widely scattered throughout England. For this reason only those with a better level of survival will be serious candidates for scheduling.'

In 2001 the Council entered into 10 year Countryside Stewardship Scheme (CSS) Agreement, when this finished in 2010 the site became incorporated into the Higher Level Stewardship (HLS) scheme for the land in RBK ownership (or long lease) that runs from TCF to Rose Walk at Berrylands. The CSS was approved for the purpose of maintaining the fields for hay meadows and restoring and maintaining the hedgerow system, in addition the creation of a wetland habitat on the wet meadow in the south east corner was completed. The key management principles were reiterated for HLS and part of the agreement allows for the reinstatement of cattle grazing on the site to improve the grassland sward. This entails the need for an expensive security gate, which is included within the management plan although insufficient money is allocated for a suitable gate. Earlier this year a grant was successfully obtained which will enable:


Work began this week with a member of the Friends of Barnes Common lending a hand and cutting a swathe through the brambles to facilitate the installation of the gate so we can get on site to make further improvements. 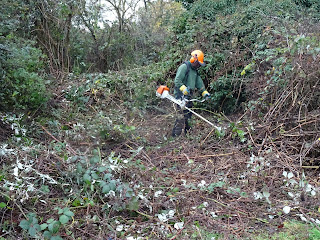