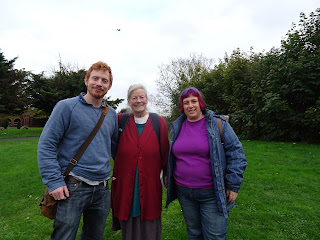 Members of the Kingston Biodiversity Network (including the recently appointed Biodiversity Coordinator, Marina Pacheco) met with Howard, the Superintendent of Kingston Cemetery to discuss ways in which the biodiversity of the site can be promoted. In particular, the formation of a comprehensive nature trail was discussed.

This is the culmination of several years of recording at the cemetery including: the flora, initially identied in the London Ecology Handbook 1992; breeding and winter birds; monitoring of bats, by members of the London Bat Group; as well as identification of the fungi.

Comprehensive data collection has resulted in the conclusion that the cemetery is worthy of a higher nature conservation designation (it is currently a Site of Local Importance  and perhaps should be a Site of Borough Importance).

Fungi identification resumed two weeks ago and will continue for the remainder of the year. Two species not previously found in the cemetery were indentified during a walkover this afternoon.

This included: meadow coral Clavulinopsis corniculata above left; found at two different compartments. This is one of the species indicative  of old meadow. Bolbitius titubans was identified by Elizabeth near one of the Deodar trees.

Fungi are important for small flies or fungus gnats, which in turn are important for foraging bats and birds at this time of year. The black points seen in the photograph below, are the heads of fly larvae. Having eaten  much of the mushroom cap  they will soon turn into valuable prey  at a lean time of the year.

lLinks to earlier posts regarding the fungi at Kingston Cemetery