This post has been written to express disappointment that in the regeneration of the  Cambridge Road estate state that SuDs - specifically swales - are considered unsuitable: the consultants report Pg 9 para 5.8.3 'Given the ground conditions, the underlying clay sub-strata will have a low permeability rate; as such it is not considered that any filtration drainage is a viable option'.

and at  Table 6.11.7 'Filter strips and swales-due to the underlying geology these are not a viable strategy'.

This runs contrary to the landscape plans that were displayed during the consultation as swales would be the major/only generator of insect food for birds and bats in compensation for the loss of mature trees.

Broadly London is  London Clay. Though there will be areas of superficial deposits on top of this, which you can check for free here: https://mapapps.bgs.ac.uk/geologyofbritain/home.html

At this site you can also look at borehole records - there might be some existing records near to this development which might give you the best idea of the likely depth of the clay, though on site tests are best. see below borehole data for Cambridge road estate at the west of the site showing different deposits to the rest of the site. (If some superficial deposits are present there could be some potential for shallow infiltration). 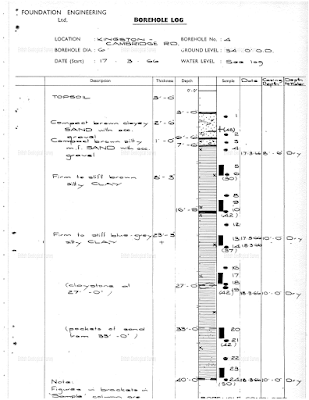 Both the Planning Practice Guidance (Flood risk and coastal change - GOV.UK (www.gov.uk)) and London Plan (Policy 5.13 Sustainable drainage | London City Hall) outline a 'hierarchy' for SuDS, with a requirement to explore options highest up the hierarchy first and where practical e.g. infiltration SuDS, then attenuation in open features, and then tanks etc. Kingston's Local Plan policy  DM4 does say development needs to be in line with London Plan hierarchy.

Clay isn't overly conducive to infiltation SuDS, and The London Plan does say for No.2. "use infiltration techniques, such as porous surfaces in non-clay areas". Kingstons Strategic Flood Risk Assessment also includes reference to infiltration SuDS unlikely to function effectively on clay. So the presence of clay can be a bit of a get out clause for infiltration SUDS.

One suspects this is because it's easier/cheaper to not bother with above-ground SuDS. Well-designed above-ground SuDS offer many benefits beyond flood attenuation e.g. biodiversity, well-being, amenity.

There are example of swales in clay areas. The above  only refers to infiltration SuDS. Swales are still a perfectly valid SuDS for above-ground storage and attenuation of water without infiltration - in this manner they could be viewed as linear storage features, and this could be the case for the examples seen elsewhere in London. see my blogposts Enfield 2016 rainscapes-in-lb-enfield catchment based approach 206 catchment-based-approach-caba-workshop.html

Indeed the SuDS hierarchy puts above ground attenuation and slow release of water above options like tanks etc. that offer no benefit apart from storage, so these should be explored first and used where possible. The swales could be designed to store water and slowly release it via a pipe, vegetation and other methods can slow the conveyance of water along the swale. If left unlined there might also be some degree of infiltration regardless of the clay, and this infiltration could be viewed as a bonus, as opposed to relied on.

The biodiversity/habitat benefits of swales are tangible, and that's just one of the reasons why they should be utilised where possible before looking at underground tanks. Policy would require them to explain why above-ground storage (even without infiltration) is not possible.

So in short, swales with infiltration might not be possible, but they can still function as attenuation features, which offer multiple benefits.

1. Extract from Kingston Strategic Flood Risk Assessment, which supports the Local Plan. Note under swales "may also permit infiltration", which indicates they do not have to be an infiltration feature, but can just be above ground storage.