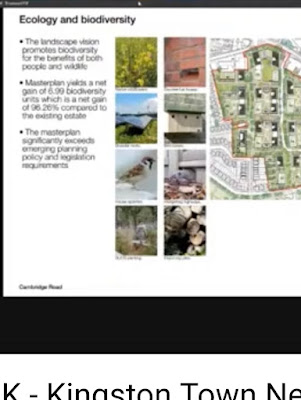 The Kingston Neighbourhood Consultation was held last Thursday. Before the meeting we received this:

Any presentations that haven't been seen and vetted by the planning department (to "guarantee they're error-free", "eliminate mistakes" and remove the potential for erroneous information being presented in online meetings) will no longer be permitted at meetings.

Representations  need to be shared with Kevin Jones no later than 10am on Tuesday 2 March for the Neighbourhood Meeting the following Thursday. It is important to note that, whilst they will have been circulated to the attendees, these slides WILL NOT be shown on the live channel to anyone else tuning in, including other speakers.

In an  unfair move, biased in favour of the council's joint venture partners, the developers WILL still be allowed to show their presentation for everyone to see. Apparently this is because everything they will be talking through has been pre-vetted by the planning department, who can therefore - I'm told - vouch for their accuracy.

I told them this:

These are the comments made to Kingston Town Neighbourhood consultation regarding Cambridge Road Estate regen 4.3.21. The video link to the discussion and other presentations is  on the Council’s YouTube channel here: https://youtu.be/gd3rXb7oBj0

60’s and 70’s estates were designed to be communal and permeable, which was reflected in the architecture and landscape; this gave us aerial walkways (streets in the sky); Radburn lines a grid of 10 north-south; east – west alleyways for walking & quiet Closes such as Franklin Close to SEPARATE PEOPLE FROM TRAFFIC.

PRIVACY FOR PLAY evidenced by sunken gardens and the MUGA siting on the eastern edge of the estate; planted with broad-leaved woodland trees of willow, ash, oak, lime, alder, and unusual stone pine, chusan palms, box elders, fruit and olives;

The new estate is based on exclusivity and ENCLOSURE of gated blocks.  Car use will be king, with the pedestrian alleyways turned into car access routes. There is little east-west communication in the new design for walkers and poor access links from the south, forcing us into our cars.  There will be no privacy for play, which will inhibit use MuGA and lead to complaints over noise. 50 trees are not included in the total number of trees lost just because they are in private gardens.  So a massive loss of local amenity.

There are Contradictions in the Environmental statement and landscaping design

The Flood Risk Assessment stated that the development was not suitable for swales due to the underlying clay. However, Sustainable Urban Drainage (SUDs) was heralded as a major part of the landscaping designs, which would act as the compensation required to generate insect food for birds and bats.

The alleyways are also important for wildlife particularly house sparrows. They state there are only 25 when the true number is closer to 125. Brought down average bat passes by putting the bat detectors out at unsuitable times of the year when the temperatures are too low for insect prey at 5/6 degrees centigrade, April 2020. Their conclusion - bats only commute and not forage- makes them look ridiculous from viewpoint of those who have attended bat walks on the estate.

They are not applying British Standard BS 5837 to trees in respect of the Root Protection Area so we will watch the trees slowly die.

Cumulative impact is not considered

No mitigation for the significant cumulative impact on biodiversity in the ward; the resident slow worm population at Kingsmeadow (decant site) or the impact on the Grade 1 Site of Nature Conservation Importance. The London Plan states in policy G6 on Biodiversity and harm to SINC’s; should have offsite Net Gain applied on the principle of biodiversity better value.

If councillors vote for this without the appropriate amendments they are voting for:

Then we had to watch while the developers showed us slides of species that don't even exist in London like tree sparrows (only found at Beddington Sewage Farm and Rainham) to tell us how green it will all be. The the leader of the council said that 'yes it will be the greenest regeneration because we will make energy from sewage' (even though this isn't in the bag yet and not even planned until Phase 3).
The developers coloured the roads, access to block roads and cycle path roads routes in green to make everything look green.
So everything will be  green then and this was "guaranteed  error-free", and "mistakes eliminated" so no potential for erroneous information being presented in online meetings.