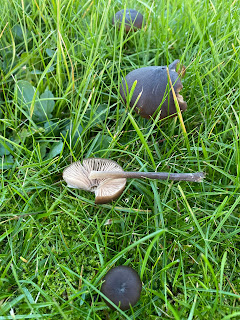 This is a short update to a previous post on  the fungi of Kingston Cemetery 16.11.19.

There was a post on the CHEG species (the acronym has changed because of changes to the genus of some of the wax caps). Although Entolomas featured in 2019 there were not as abundant as they are at the moment.

These are particularly prevalent in Surbiton Cemetery under/close to the boundary pines. Not much to look - but they do tell us (along with other members of the 'CHEG' species) something about the quality of the grassland - that it is unimproved. Unimproved grassland is a priority habitat.