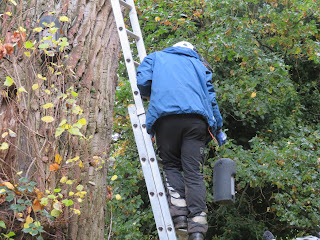 This Autumn we emptied about 30 bat boxes on Tooting Common. These were situated mainly on the great two-hundred year old oak trees, but also on the occasional ash and clumps of willow trees. Every single one had been used by an animal or bird. Mostly blue and great tits had used the boxes for bringing up their broods, but wrens had used them as night roosts (quite recently according to fresh droppings). Wood mice had entered a few (near the lake) and we suspect a pygmy shrew in the one below, where there was a clearly defined small exit hole, near the pink area in the photo. 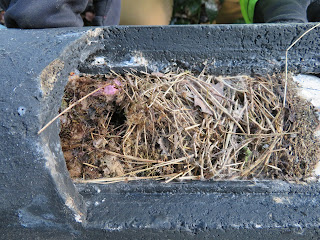 In some cases birds will nest in the box bottom and bats can hang in the top, benefiting from the warmth of the birds. In all cases, spiders had used the boxes for breeding and we found centipedes, large numbers of two species of slug, woodlice and earwigs. Althouh we didn't find any bats but with the range of species recorded- it is more than likely- that bats  spend many nights within these solid thermocrete shelters.The 2F Schwegler bat boxes are an excellent choice for a range of bat species.They are guaranteed to last for a number of years and are resistant to damp unlike wood. 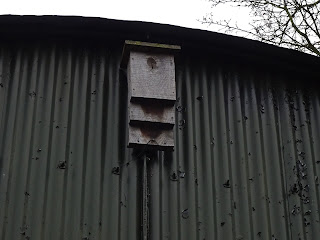 The Kent bat box (above) is a very popular choice with bats and they have the added advantage in that they can be checked from the ground. This is one on the flank wall of the barn in Richmond park and both compartments are being used as can be seen from the fur staining within the middle of the entrance slits. These can be made very cheaply from wood offcuts and are a cheap alternative to the Schwegler 1FF. More on bat box choices can be seen here.

Bats have been  active for longer than usual this autumn, due to the warm evening temperatures. Insects have been much in evidence rising from the water column, particularly along the Hogsmill and the Beverley Brook. Last Friday we had three bat species on Epsom Common: Leisler's bat, Common pipistrelle bat and Daubenton's bat. 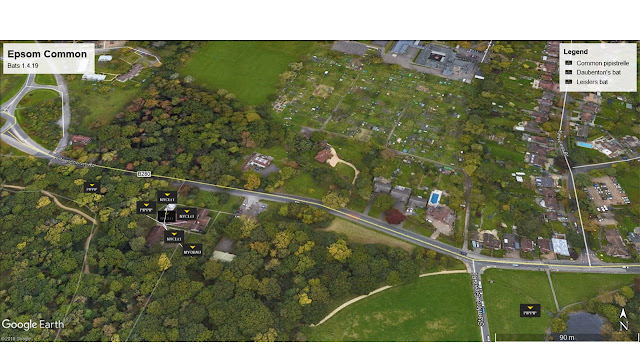