July 29, 2019
Note: Zuihitsu is a Japanese style of literature that can drift like a cloud or read like a song. It comprises a number of loosely connected themes, often featuring poetry inserts, expressing typical Japanese themes, such as nature and the changing seasons. Here 'Tolworth Day' (29.7.19) and  Tolworth Court Farm, are connected to lines found in John Clare's poems. 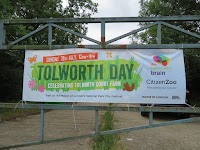 1. The trickling brook veins sparkling to the sun J.C.

Actually there are two rivers here: the Hogsmill rising east to west from its spring ponds, boldly crosses the county boundary from Surrey into London at Tolworth; and the Bonesgate rising unseen, with two sediment laden arms, somewhere between  Chessington's farms and roads, only traced in places by  power and tree lines. A Guardian article (2015) attests that its  named from the resting place of London's  plague victims, but it seems only part of the story, due to its inaccessible location.Bonesgate sediment


2. The black ants city by the fallen tree J.C.
John Clare could be referencing jet ant Lasius fuliginosus, apt as there is still a tree on Tolworth Court Farm, where jet ants with their heart shaped heads process up the trunk of an old oak tree to milk aphids, which they farm. This is a species requiring rotten wood to complete their life cycle and may be the remaining  site in the borough  for this species for more read tolworth-treasure-ancient-droves

John Clare is describing the eggs of the yellowhammer not recorded on TCF for many years. It is sometimes recorded on Chessington Farmland, Ashtead Common and Horton C.P. where I remember breeding territories. With only 792,000 yellowhammer territories in the UK, this species has declined by 50% in only twenty-five years and “red-listed” by the RSPB as endangered. Habitat loss is not the only factor affecting yellowhammers; farmland management has a negative impact. Grain collection has become more efficient resulting in less “spillage” so less grain on the ground as winter approaches. Supplementary feeding has been organised with positive results at Park Farm, Chessington. But the return to TCF of this and other farmland bird species - such as skylark - could now only be achieved with the implementation of  grazing.

This could easily describe Richard Jefferies, a  Tolworth resident between 1877-1882. Every day he walked 10 miles, due to failing health. His weekly column for the Pall Mall Gazette changed during this period of residency, from a commentary on the condition of agricultural labourer's, to the natural world especially of Tolworth, Claygate, Worcester Park etc. This included references to trout in the Hogsmill, Nightingale Lane  and the ill-treated cattle with their great heads moving side to side along the Ewell road. This route suggests that they may have been moved by rail as the railway arrived in Surbiton 1840's, which was a great attraction, see more kingstons-drove-roads 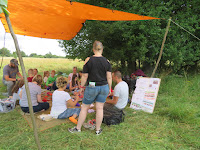 5. Grasses never knew a single scythe J.C.
Four years ago we held a scything workshop on Tolworth Court Farm Moated Manor. The sward is currently the most floriferous in recent times. tolworth-court-farm-moated-manor-scything 1 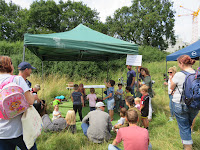 6. The hedgehog hides beneath the rotten hedge J.C.
The south and south east  of the borough might be a last district stronghold for this species. Over the county boundary around Cox Lane,  was  my last local hedgehog encounter. It didn't seem to have the least clue where it was headed but was probably confused by our lights. tolworth-treasure-and-hogsmill

7. From pewit haunted flats are gone J.C.
The 'Britain from Above' website shows Great Butts field with expanses of standing open water at least six months of the year; the active flood plain of the Hogsmill river. It was here that Jefferies remarked on seeing 2,000 lapwings during the winter (I recorded 200 regularly above the Portsmouth road at Seething Wells). Now the only evidence of former marshy ground, are the three species of reed that dominate the vegetation at Great Butts, with phyragmites the most abundant at the low point around the first pylon. Flooded fields photo


8. Journey to Milking from the neighbouring town J.C.
This journey would have been made via the drove routes as the only viable way of travelling with animals - exempt from road tolls. The drove road in Chessington is still intact and can be traced on a direct route through Tolworth's droves. These double hedgerows with oak standards are perfect for purple and brown hairstreaks. Brown hairstreaks TCF 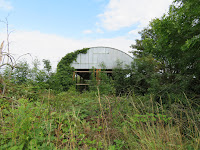 9. Bard of the Mossy shed J.C.
Over the A240 there is a hidden part of TCF. At some point in its history it was a moated manor. There are still  foundations of old farm buildings, including a barn and brick built byre. During the 1950's the Offer family continued their dairy business until it became impractical to walk cattle across a busy road four times daily. At Queen's Promenade, Kingston riverside can be found a memorial bench dedicated to Mr. H. Offer, last dairy farmer of Tolworth. A fireman friend, bought a tin of brasso last year, and polished it until it shone.