August 13, 2018
Drove roads often followed ancient trackways and sometimes ran parallel to turnpikes in order to avoid paying tolls. Drove roads were nearly 20m  in width and were often hedged to prevent animals straying into local  herds, and from damaging  cultivated crops. The routes were sometimes way marked with evergreen trees - easily visible at all times of the year - and included holly, laurel, yew,  growing freely above the hedge line.

Scots pine and larch were also used as way marks along the route and clumps of these trees also denoted stopping places at inns and farms, the word 'clump' being associated with drover's roads.

Droving  inns were  called 'butts' and had adjoining paddocks of about 8 acres where the animals rested on their journey. Tree lined ponds were also situated along the route for the watering of animals. Drove roads are often called Lanes or Ways such as Rushett Lane, Fairoak Lane. Drift was an old name for drove and any name with the prefix 'Ox' such as Oxshot or Oxted.

Drovers went on epic journeys: the route from North Wales to the south-east of England is over 250 miles; It was important that the stock ended the journey in good condition, beasts were ‘drifted’ southward at only 12-15 miles a day.  So the Welsh route took three weeks, the Scottish route nearly seven.

In 1800, 200,000 cattle, one and a half million sheep as well as donkeys geese and pigs ultimately to Smithfield, the London market. William Cobbett residing at Barn Elms wrote of the drovers met on his 'Rural Rides' although he said little on this subject of  the droves north of Normandy Common, Hogs Back in Surrey (although we have the place names such as Coldharbour Lane at Leith Hill, which is the route currently taken by some of the fracking lorries). Richard Jefferies wrote of the cattle walking along the Ewell Road and being in a poor condition with their heads swaying from side to side. It could be that these were being 'drifted' from Surbiton Station to the Tolworth Farms as the railways took over the function of  drovers.


Yesterday many of you joined us to share knowledge, thoughts and poems as we walked the drove roads of Tolworth Court Farm turning into Cox Lane. We saw the boundary ash trees marking the trackway along  to Chantry Road. The main drove which runs perpendicular to Cox Lane was thought to be a medieval route connecting three manors of the Grapsome, Talworth and Malden Manor. 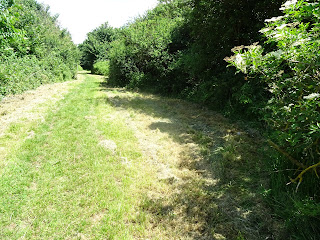 Perpendicular to the path leading to the Grapsome under the Ewell by - pass is a two stage path - or green lane - leading to Mansfield Road.The double - hedgerow either side of the drove is an insect trap - offering a warm sheltered environment - and a good place to watch for hair streak butterflies, including purple hair streaks. We mentioned plants of natural and semi-natural neutral grassland such as the pepper saxifrage, meadow and grass vetchling and their locations in the field system.


So I read John Clare's poem which starts 'these tiny loiterers on barley's beard'. Elizabeth read a poem My Orcha'd in Lindèn Lea written by Dorset writer and poet William Barnes (1801-1886) and Lucy read John Barleycorn. John Barleycorn in the song is a personification of the important cereal crop barley and of the alcoholic beverages made from it, beer and whisky. In the song. John Barleycorn is represented as suffering indignities, attacks and death that correspond to the various stages of barley cultivation, such as barley and malting.

We finished our walk by looking for jet ants on  old oak trees near seven acre field. Jet ants live only in hollow trees.They are a shining glossy black, like the mineral jet, hence their name.They are slightly bigger than normal lawn ants and have distinctive heart-shaped heads.These ants chew up the wood of a hollow tree and use it to make a paste from which they construct a home of cells inside the tree. Jet ants are becoming increasingly uncommon because hollowing trees are ofter removed for reasons of health and safety.

This is a great website to read more on drove roads and I hope Bruce of the drove roads will be coming to see us 'before the year ends' http://www.localdroveroads.co.uk There is also a handy Shire Guide written by Shirley Toulson called The Drovers. The rest is all 'reading between the lines'.
Bruce of the drove roads Cox Lane drove roads Grapsome jet ants John Clare Lasius fuliginosus Lucy Furlong purple hairstreak