March 12, 2019
If I had been keeping my blog in 2004-08, I might have written about Hainault Forest, one of my favourite open spaces in the LB of Redbridge. But I wasn't, so I didn't, but will make up for it now that I am revisiting the sites that I surveyed >ten years ago, to see how they have changed. Hainault Forest is one of the remaining sections of the former Forest of Essex.  In a survey made for Henry V111 in 1544 its extent was some 3,000 acres. The forest land was condemned as a waste in 1851, and deforested; the deer were removed, and 92% of the old growth forest cut down. Hornbeam and beech are it's characteristic tree species including pollards of the former.

The land became marginal agricultural land and subsequently a significant proportion has been built on. Redbridge manage the country park and the Essex side is managed by the Woodland Trust who are in the business of reforesting. 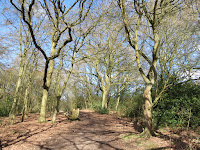 This link to the website - written by local naturalist Brian Ecott - is the most comprehensive on its flora and fauna.http://www.hainaultforest.co.uk/  During 2006, I undertook a Longworth trapping project - over an October weekend - and recorded mole, fox, weasel, bank and field vole, wood mouse and both shrew species. In the surrounding farm land (2004-6) were boxing hares skylarks, bullfinch as well as tawny owls. I imagine only the latter are routinely recorded these days.


I led several bat walks there in the early 'noughties' and found it one of the best sites for bats in the borough with 2 Myotis (Daubenton's and Natterer's bat) and Nyctalus species (Noctule and Leisler's bat) along with a roost of brown long-eared bats (unusual in London, as this is a species said to prefer to stay within the woodland canopy).

In August 2010, the Nature Conservation Rangers (Francis and Tajinder) participated in a London wide Moon Phase survey, convened by the London Bat Group; looking at the behaviour of Daubenton's bats to full and no moonlight. Over 70 passes were recorded on the western (dark) side of the lake where the overhanging vegetation created shading. Only 6 passes were recorded in the open areas. The results are available on the London bat group website.

Since 2017 and during 2018, there have been occasional records of the rare Barbastelle bat an Annex 2 species, whose habitat is given additional protection under European Law rare-barbastelle-bat-found 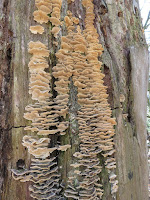 During yesterday's visit, buzzard, were seen being mobbed above the lake, a species doing well in Greater London, especially where rabbits are found. Woodpeckers were heard drumming in trees behind the lake where we admired an abundance of honeysuckle.

The area pinpointed by Redbridge regeneration is 162 acres of green belt farmland on Hainault and Red House Farms on Hainault Road, Little Heath. if it was developed it would cut the Plains SINC in two opening up the rest for development. The Fairlop SINC is important for London and the petition can be seen here petition.